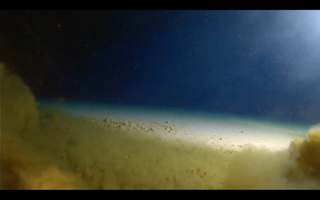 The submersible reaches the bottom of the Challenger Deep in the Mariana Trench.
(Image: © Atlantic Productions for Discovery Channel)

Explorer and businessman Victor Vescovo descended 35,853 feet (10,927 meters) into the Pacific Ocean, breaking the record for deepest dive ever.

At the very bottom, he found colorful rocky structures, weird critters and the ever-pervasive mark of humankind — plastic.

Until now, only two people have successfully made it to the bottom of Challenger Deep, the planet's deepest point at the southern end of the Mariana Trench. Back in 1960, oceanographer Don Walsh was the first to make it down to the trench successfully, reaching about 35,814 feet (10,916 m). He took the journey with Swiss oceanographer and engineer Jacques Piccard. [In Photos: James Cameron's Epic Dive to Challenger Deep]

Over 50 years later, Canadian explorer and filmmaker (writer and director of movies such as "Avatar" and the "“Titanic") James Cameron took the first solo dive and reached a depth of 35,787 feet (10,908 m).

In the recent dive, Walsh accompanied a team up above on the ship, as Vescovo descended alone in a submersible called the DSV Limiting Factor. It took 3.5 to 4 hours to reach the record-breaking depth — a flat, beige basin covered with a thick layer of silt.

From inside the submersible designed to withstand extreme pressures, he spent hours observing and documenting the quiet, dark alien world.

It was chilly; it was quiet; and "it was so very peaceful," he told Live Science. "I was surrounded by enormous pressure, but I was safely cocooned in my technological bubble." The pressure at that depth is about 16,000 pounds per square inch, over a thousand times more than the pressure at sea level. After Vescovo's record-breaking dive, other team members took four other subsequent dives to the trench.

In the depths, during those five dives, they discovered red and yellow rocky outcrops that could be chemical deposits or bacterial mats, which are made by chemosynthetic microbes, meaning they can convert carbon-containing molecules into organic matter.

They also observed a variety of critters. "There were some small, translucent animals," gently moving about, Vescovo said.

At the deepest point, they were accompanied by some transparent bottom-dwelling sea cucumbers (Holothurians) and an amphipod called the Hirondellia gigas. Because on previous missions these amphipods have been found to have microplastics in their guts, the team collected samples to test how much. Sitting there in the deepest point of the planet, Vescovo also came across a plastic bag and candy wrappers.

After spending hours crisscrossing the bottom of the Challenger Deep, collecting video evidence of different wildlife, geological formations and man-made objects, Vescovo stopped for a second.

"Honestly, toward the end, I simply turned the thrusters off, leaned back in the cockpit and enjoyed a tuna fish sandwich while I very slowly drifted just above the bottom of the deepest place on Earth, enjoying the view and appreciating what the team had done technically," Vescovo said. "It was a very happy, peaceful moment for me."

In the months leading up to this dive, the explorer reached the deepest points of the Atlantic, Southern and Indian oceans as part of the Five Deeps Expedition, which aims to reach the bottom of every ocean on the planet. The expedition is being filmed for "Deep Planet," a documentary series that will air on the Discovery Channel later this year.