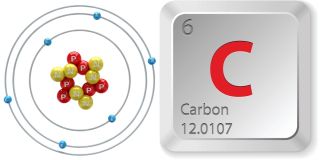 Carbon is an incredible element. Arrange carbon atoms in one way, and they become soft, pliable graphite. Re-jigger the arrangement, and — presto! — the atoms form diamond, one of the hardest materials in the world.

Carbon is also the key ingredient for most life on Earth; the pigment that made the first tattoos; and the basis for technological marvels such as graphene, which is a material stronger than steel and more flexible than rubber. [See Periodic Table of the Elements]

Carbon: From stars to life

As the sixth-most abundant element in the universe, carbon forms in the belly of stars in a reaction called the triple-alpha process, according to the Swinburne Center for Astrophysics and Supercomputing.

In older stars that have burned most of their hydrogen, leftover helium accumulates. Each helium nucleus has two protons and two neutrons. Under very hot temperatures — greater than 100,000,000 Kelvin (179,999,540.6 F) — the helium nuclei begin to fuse, first as pairs into unstable 4-proton beryllium nuclei, and eventually, as enough beryllium nuclei blink into existence, into a beryllium plus a helium. The end result: Atoms with six protons and six neutrons — carbon.

Carbon is a pattern maker. It can link to itself, forming long, resilient chains called polymers. It can also bond with up to four other atoms because of its electron arrangement. Atoms are arranged as a nucleus surrounded by an electron cloud, with electrons zinging around at different distances from the nucleus. Chemists conceive of these distances as shells, and define the properties of atoms by what is in each shell, according to the University of California, Davis. Carbon has two electron shells, with the first holding two electrons and the second holding four out of a possible eight spaces. When atoms bond, they share electrons in their outermost shell. Carbon has four empty spaces in its outer shell, enabling it to bond to four other atoms. (It can also bond stably to fewer atoms by forming double and triple bonds.)

In other words, carbon has options. And it uses them: Nearly 10 million carbon compounds have been discovered, and scientists estimate that carbon is the keystone for 95 percent of known compounds, according to the website Chemistry Explained. Carbon's incredible ability to bond with many other elements is a major reason that it is crucial to almost all life.

Carbon's discovery is lost to history. The element was known to prehistoric humans in the form of charcoal. Carbon as coal is still a major source of fuel worldwide, providing about 30 percent of energy worldwide, according to the World Coal Association. Coal is also a key component in steel production, while graphite, another form of carbon, is a common industrial lubricant.

Carbon-14 is a radioactive isotope of carbon used by archaeologists to date objects and remains. Carbon-14 is naturally occurring in the atmosphere. Plants take it up in respiration, in which they convert sugars made during photosynthesis back into energy that they use to grow and maintain other processes, according to Colorado State University. Animals incorporate carbon-14 into their bodies by eating plants or other plant-eating animals. Carbon-14 has a half-life of 5,730 years, meaning that after that time, half of the carbon-14 in a sample decays away, according to the University of Arizona.

Because organisms stop taking in carbon-14 after death, scientists can use carbon-14's half-life as a sort of clock to measure how long it has been since the organism died. This method works on once-living organisms, including objects made of wood or other plant material.

Carbon is a long-studied element, but that doesn't mean there isn't more to discover. In fact, the same element that our prehistoric ancestors burned as charcoal may be the key to next-generation tech materials.

In 1985, Rick Smalley and Robert Curl of Rice University in Texas and their colleagues discovered a new form of carbon. By vaporizing graphite with lasers, the scientists created a mysterious new molecule made of pure carbon, according to the American Chemical Society. This molecule turned out to be a soccer-ball-shaped sphere made of 60 carbon atoms. The research team named their discovery the buckminsterfullerene after an architect who designed geodesic domes. The molecule is now more commonly known as the "buckyball." The researchers who discovered it won a Nobel Prize in Chemistry in 1996. Buckyballs have been found to inhibit the spread of HIV, according to a study published in 2009 in the Journal of Chemical Information and Modeling; medical researchers are working to attach drugs, molecule-by-molecule, to buckyballs in order to deliver medicine directly to sites of infection or tumors in the body; this includes research by Columbia University, Rice University and others.

Since then, other new, pure carbon molecules — called fullerenes — have been discovered, including elliptical-shaped "buckyeggs" and carbon nanotubes with amazing conductive properties. Carbon chemistry is still hot enough to capture Nobel Prizes: In 2010, researchers from Japan and the United States won one for figuring out how to link carbon atoms together using palladium atoms, a method that enables the manufacture of large, complex carbon molecules, according to the Nobel Foundation.

Scientists and engineers are working with these carbon nanomaterials to build materials straight out of science-fiction. A 2010 paper in the journal Nano Letters reports the invention of flexible, conductive textiles dipped in a carbon nanotube "ink" that could be used to store energy, perhaps paving the way for wearable batteries, solar cells and other electronics.

Perhaps one of the hottest areas in carbon research today, however, involves the "miracle material" graphene. Graphene is a sheet of carbon only one atom thick. It's the strongest material known while still being ultralight and flexible. And it conducts electricity better than copper.

Mass-producing graphene is a challenge, though researchers in April 2014 reported that they could make large amounts using nothing but a kitchen blender. If scientists can figure out how to make lots of graphene easily, the material could become huge in tech. Imagine flexible, unbreakable gadgets that also happen to be paper-thin. Carbon has come a long way from charcoal and diamonds, indeed.

A carbon nanotube (CNT) is a minuscule, straw-like structure made of carbon atoms. These tubes are extremely useful in a wide variety of electronic, magnetic and mechanical technologies. The diameters of these tubes are so tiny that they are measured in nanometers. A nanometer is one-billionth of a meter — about 10,000 times smaller than a human hair.

Carbon nanotubes are at least 100 times stronger than steel, but only one-sixth as heavy, so they can add strength to almost any material, according to nanoScience Instruments. They are also better than copper at conducting electricity and heat.

Nanotechnology is being applied to the quest to turn seawater into drinking water. In a new study, scientists at Lawrence Livermore National Laboratory (LLNL) have developed a carbon nanotube process that can take the salt out of seawater far more efficiently than traditional technologies.

For example, traditional desalination processes pump in seawater under high pressure, sending it through reverse osmosis membranes. These membranes then reject all large particles, including salts, allowing only clean water to pass through. However, these desalination plants are very expensive and can only process about 10 percent of a county's water needs, according to LLNL.

In the nanotube study, the scientists mimicked the way biological membranes are structured: essentially a matrix with pores inside the membrane. They used nanotubes that were particularly small — more than 50,000 times thinner than a human hair. These tiny nanotubes allow for a very high flux of water but are so narrow that only one water molecule can pass through the tube at a time. And most importantly, the salt ions are too big to fit through the tube.

The researchers think the new discovery has important implications for the next generation of both water purification processes and high-flux membrane technologies.