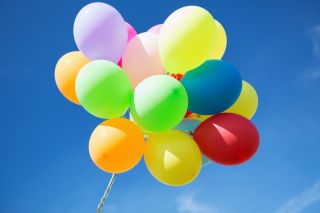 First discovered in the corona surrounding the sun and later found in gases leaking from Mount Vesuvius, helium is the second-most abundant element in the universe.

The second element on the Periodic Table of Elements is inert, colorless and odorless — but far from boring. Helium shows up in semiconductors, birthday balloons and the Large Hadron Collider. Because of its extremely low density, helium floats in air. The low density is also responsible for the weird "squeaky voice" effect when helium is inhaled. The less dense the gas surrounding the vocal cords, the faster they vibrate, sending the voice's pitch skyward. (Practice this party trick in moderation, though: Helium replaces oxygen in the lungs and can kill you if you inhale enough.)

Read on for more about this lighter-than-air gas, its amazing discovery story and all of its myriad uses today.

According to the Jefferson National Linear Accelerator Laboratory, the properties of helium are:

On Aug. 18, 1868, a total eclipse obscured the sun. French astronomer Pierre Janssen was on-hand in India to watch, and to measure the sun's atmosphere, known as the chromosphere. In the spectrum of gases he observed in the chromosphere was a strange yellow line with a wavelength of 587.49 nanometers, according to the Jefferson Lab.

Janssen didn't identify the source of this wavelength. Two months later, though, English astronomer Sir Norman Lockyer set up his own spectroscope in London and saw that same yellow line. Working with chemist Edward Frankland, Lockyer concluded that the line was the fingerprint of an unknown element. The scientists dubbed this mystery element "helium," after Helios, the Greek god of the sun.

The discovery of helium on Earth took longer. According to the Royal Society of Chemistry, Italian physicist Luigi Palmieri observed a wavelength of 587.49 nanometers in gases emitted from Mount Vesuvius in 1882, the first detection of helium on Earth. It wasn't until 1895, however, that helium's presence on Earth was confirmed and that scientist discovered its atomic weight. Credit for this discovery goes to Swedish chemists Per Teodor Cleve and Nils Abraham Langer.

Earth's atmosphere is only about 5 parts per million, or 0.0005 percent, helium. As such, it's not economical to extract the gas from air. Instead, the helium used in science and industry today comes from natural gas, where this element was first discovered in 1905.

The initial hint that helium was lurking in natural gas occurred in 1903, according to the American Chemical Society (ACS). At a celebration of a new gas well in Dexter, Kansas, the mayor attempted to ignite the escaping gases, only to find that the flames went out. Most of the townspeople were disappointed, but Kansas state geologist Erasmus Haworth became curious. He had the gas from the well collected and discovered that 12 percent was made of an "inert residue." Further experiments over the next two years at the University of Kansas revealed helium gas among this residue.

At first, no one thought the discovery of helium in natural gas had much application. But during World War I, military leaders and scientists began to push for helium's use in blimps. Helium blimps weren't used much in World War I because of the cost of production, according to the ACS, but they became much more common in World War II, by which time the cost of helium had dropped.

Today, helium is frequently found in laboratories that require extra-cold temperatures for experiments, because this inert gas can be chilled to temperatures near absolute zero. According to the American Physical Society, most helium in the United States is used in industry and in cooling the magnets in magnetic resonance imaging (MRI) machines. Only about 3 percent of the helium used in the United States each year is consumed by scientific labs. Liquid helium also cools the magnets in the Large Hadron Collider, the world's largest particle accelerator, down to -456.34 degrees Fahrenheit (-271.3 degrees Celsius).

The United States produces about 75 percent of the world's helium, with Qatar coming in second. In 2013, fears of a global helium shortage loomed when a 1996 law went into effect requiring the U.S. Bureau of Land Management to sell off federal reserves of helium on the cheap, discouraging the development of new helium sources. However, Congress acted, passing the Helium Stewardship Act of 2013, which slowed the sale of federal helium and allowed the BLM to auction the gas at higher prices. The bill prevented the federal government from undercutting private producers, thus encouraging more sources of helium production to go online.

Helium is helping scientists peer past the limits of their knowledge about physics and chemistry, thanks to its convenient ability to become a superfluid with relative ease.

Superfluids are liquids that behave as if they have no viscosity, or resistance to flow. "When atoms come together in a superfluid state, they all of the sudden behave as one object," said Oliver Gessner, a senior scientist at the Ultrafast X-ray Science Laboratory at Lawrence Berkeley National Lab, and one of the lead researchers on a project that delved into superfluid helium and observed some very bizarre behavior.

Gessner and his colleagues were looking to push the limits of fundamental physics by testing the behavior of superfluid flows under conditions never studied before. They turned to helium because this element's atoms come together into a superfluid state at temperatures that are relatively easy to generate, Gessner told Live Science — about 2 Kelvin, or minus 456 degrees Fahrenheit (minus 271 degrees Celsius). Other elements would freeze solid at those temperatures, Gessner said.

The researchers squirted the liquid into a vacuum chamber through a nozzle only 5 microns wide, about the same diameter as a red blood cell. The tiny droplets exist for mere milliseconds as they fly across the chamber at about 655 feet (200 meters) per second, Gessner said.

Incredibly, using an X-ray free-electron laser, the scientists are able to observe these moving targets by shining pulses of light on them midair. They discovered that the droplets indeed behave like superfluids.

From a distance, the droplets' behavior looks almost banal. They rotate and compress slightly, going from spherical to a little bit flattened, just as a droplet of regular rotating liquid might do. But simultaneously, Gessner said, these droplets are behaving according to the rules of quantum physics, which deal with the behavior of nano-sized opbjects. Inside each droplet is a grid of tornado-like vortices. The sum of the rotation of these infinitesimally small tornadoes is what drives the rotation of the entire droplets, Gessner said.

"At the same time that it behaves, in a way, like a classical liquid, on a microscopic scale, it shows clear quantum behavior," he said.

The study, published in August 2014 in the journal Science, studied the helium superfluid droplets as they spun at speeds 100,000 times faster than any ever studied before in the laboratory. Those blistering speeds are important for pushing physics understanding, Gessner said.

"If you find that a certain law of physics is valid for a certain speed or a certain size of object, is it also valid for something that is 100,000 times bigger or 100,000 times faster?" he said. The equivalent might be building a sandcastle a meter, or about three feet tall, and then testing to find out if you can use the same design principles to build a sandcastle 100 kilometers, or 62 miles, tall, Gessner said.

The helium superfluid droplets still contain mysteries, including the origin of the strange grid of vortices. Researchers now know that the tiny nozzle method works to create these rotating droplets, but not why.

"One aspect we haven't touched on at all in the last study is where does this vorticity actually come from, and how could we eventually maybe control it?" Gessner said.