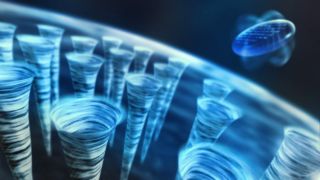 An illustration of the grid of tiny tornadoes discovered inside a single helium droplet. The density of tornadoes is 100,000 times greater than any previous experiment with superfluids.
(Image: © SLAC National Accelerator Laboratory)

Inside a single wheel-shaped droplet of liquid helium rotating 2 million times per second, scientists have spotted a storm of dozens of tiny tornadoes whirling around.

The droplets of liquid helium spun 100,000 times faster than in any previous experiments. The grid of quantum tornadoes inside the droplets could reveal interesting information on the bizarre nature of "superfluid" liquid helium and the nature of quantum rotation, say the international team of scientists involved in the study.

"The quest for quantum vortices in superfluid droplets has stretched for decades," Andrey Vilesov, a professor of chemistry at the University of Southern California, said in a statement. "But this is the first time they have been seen in superfluid droplets." [Twisted Physics: 7 Mind-Blowing Findings]

A superfluid state happens when a substance behaves like a liquid with zero viscosity — a measure of a liquid's thickness, or its resistance to flow. For example, honey has a much higher viscosity than water. The particles in superfluid liquid lose all friction and instead move around in unison like one supersize particle.

The fact that this happens in a superfluid suggests the findings may have implications for much more far-out ideas. "Some speculate that studying superfluids could help [scientists] understand the origins of the universe," Vilesov told Live Science in an email. "In the moments following the Big Bang, the universe was uniform in density and similar to a superfluid. The creation of density fluctuations in the form of quantum vortices may be what led to the early formation of galaxies."

The superfluid state of liquid helium defies the laws of classical physics, and instead enters the weird world of quantum mechanics, where not even all physicists agree on its rules. Quantum behavior usually applies only to fundamental particles like electrons and neutrinos, but liquid helium is one of the few larger-scale environments that exhibit quantum behavior, and scientists have an easier time observing quantum mechanics at work.

Helium can exist only in liquid form at about minus 452 degrees Fahrenheit (minus 269 degrees Celsius). Once the liquid helium is chilled to almost absolute zero on the Kelvin scale (about minus 460 F, or minus 273 C), the material becomes a superfluid. Inside the superfluid, the atoms of liquid helium constantly vibrate, and this perpetual motion makes it impossible for atoms to freeze. The result is that the chilled helium atoms remain in liquid form. The unique properties of the resulting superfluid allow it to crawl up the sides of containers and seep through microscopic holes, according to NASA's website.

Scientists had already observed multiple tornadoes spinning around in buckets of liquid helium, but never in such tiny droplets where the tornadoes were packed in 100,000 times more densely. The results show that each individual drop acts as its own separate quantum object.

In the first experiment, researchers shot a stream of liquid helium into a vacuum. The nozzle of the jet was cooled to 10 below Kelvin (minus 478 F, or minus 283 C). Each microscopic droplet fired reached a speed of almost 447 mph (720 km/h) and began spinning up to 2 million times per second.

Scientists have been unable to closely observe individual droplets moving at such breakneck speeds — until now.The researchers used the world's first X-ray free-electron laser at the SLAC National Accelerator Laboratory's Linac Coherent Light Source facility at the U.S. Department of Energy's Office of Science to spy on the quantum tornadoes. The laser sends out pulses of light particles, each of which lasts just ten-trillionths of a second. Light from the ultrafast laser diffracted off the droplets and revealed patterns in individual droplets as they flew past.

The tiny twisters raging inside each droplet are actually invisible to the electron-free laser. The researchers had to add xenon atoms to the liquid helium to get a clear picture of the tornadoes. The forces inside each drop pulled the xenon atoms into swirling columns. [Dazzling Droplets: Photos Reveal Mini Worlds]

"It's similar to pulling the plug in a bathtub and watching the kids' toys gather in the vortex," Oliver Gessner, senior scientist in the chemical sciences division at Lawrence Berkeley National Lab, said in the statement.

The xenon atoms are better at diffracting the X-ray light than the surrounding helium, and the resulting images from that diffracted light revealed the clusters of darker tiny tornadoes dubbed "quantum vortices." The tornado cores are only about the width of an atom. The images showed a 3D grid of evenly spaced tornadoes.

"We were surprised to see that many vortices," Vilesov told Live Science. "Initially, when we applied for the X-ray beam time, we thought there may be some droplets with at least a single vortex. Some colleagues were even not sure about that."

The resulting pattern of tiny twisters was not the only surprise for the researchers. The laser images showed that about 40 percent of the droplets were not spherical like normal droplets.

When drops of normal liquid spin that fast, forces can warp them into peanutlike shapes. But liquid helium drops took on a different shape: The tops and bottoms of the droplets flattened out, and their centers expanded. The strange wheel-shaped droplets spun faster than any liquid helium ever observed.

"Now that we have shown that we can detect and characterize quantum rotation in helium nanodroplets, it will be important to understand its origin and, ultimately, to try to control it," Gessner said in the statement.

Details of the study are published in the Aug. 22 issue of the journal Science.