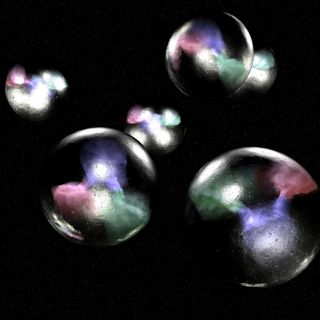 Let's face it: quantum mechanics is really confusing. All the rules of physics that we're used to simply go straight out the window in the quantum realm.

Put a particle in a box. According to classical physics (and common sense), that particle should stay in that box forever. But under quantum mechanics, that particle can simply be outside the box the next time you look. In classical thinking, you can measure the momentum and position of something to an arbitrary degree of precision. Not so in the quantum world — the more you know about one, the less you know about the other. Is something a wave or a particle? According to the classical viewpoint, you can pick one and only one. But ask your friendly neighborhood quantum mechanic, and they'll tell you something can be both.

The quantum world is hard to understand, but at some point the rules of the subatomic give way to the rules of the macroscopic. But how? We're not exactly sure, and it's been a long, strange journey in trying to answer that question.

One atom at a time

The first person to put some useful labels on the quantum world was physicist Niels Bohr. In the early 1900s, scientists around the world were beginning to awaken to the strange and unexpected behavior of atomic and subatomic systems. They had, after decades of grueling work, realized that certain properties, like energy, come in discrete packets of levels dubbed "quanta." And while physicists were beginning to sketch out a mathematical foundation to explain these experiments, nobody had yet developed a complete, consistent framework.

Bohr was one of the first to attempt it. And while he didn't provide a full theory of quantum mechanics, he did lay some serious groundwork. He also promoted some ideas that would become the cornerstones of modern quantum theory.

The first appeared in his early attempt to model the atom. In the 1920s, we had known through a variety of very cool experiments that the atom is made of a heavy, dense, positively charged nucleus surrounded by a swarm of tiny, light, negatively charged electrons. We also knew that these atoms could only absorb or emit radiation at very specific energies.

Bohr put the electrons "in orbit" around the nucleus, waltzing around that dense core like planets in an eensy-teensy solar system. In a real solar system, the planets can have whatever orbit they like. But in Bohr's atom the electrons were stuck on little tracks — they could only have certain predefined orbital distances.

By jumping from one orbit to another, the atom could receive or emit radiation at specific energies. Its quantum nature was thus encoded.

Related: How a Last-Ditch Hack Led to the Invention of Quantum Mechanics

But Bohr added one more interesting twist. There are a lot of potential ways to construct a quantum model of the atom — why should this one be used? He found that when the electrons orbited very far away from the nucleus, their quantum nature disappeared and the atom could be perfectly described by classical electromagnetism. Just two charged particles hanging out.

This was called the Correspondence Principle, and it was Bohr's argument that his model of the atom was the best. You can have any quantum theory you want, but the right ones are the ones that give way to classical physics under some limit. In the case of his atom, when the electrons got far away from the nucleus.

Bohr's model of the atom was incomplete and would later be replaced by the valence shell model that remains to this day. But his Correspondence Principle lived on, and it formed a cornerstone of all quantum theories to come — a guiding light that allowed physicists to construct and select the right mathematics to describe the subatomic world.

But Bohr didn't stop there. He argued that, even though this Correspondence Principle allowed a connection between the quantum and classical worlds, those two worlds are not the same.

No quantum for you

Around the same time that Bohr was puzzling all this out, his good buddy Werner Heisenberg came up with his soon-to-be-famous Uncertainty Principle. Try to measure the position of a tiny particle, and you'll end up losing information about its momentum. Go for the opposite, trying to pin down its momentum, and you'll become ignorant about its position.

Bohr took this idea and ran with it. He saw Heisenberg's Uncertainty Principle as a part of a much larger facet of the quantum world: that everything comes in pairs. Consider the most famous pair in the quantum world, the wave and the particle. In classical systems, something is either purely a wave or purely a particle. You can pick one or the other to classify some behavior. But in quantum mechanics, these two properties are paired up: everything is simultaneously both a particle and a wave and always exhibits some properties of both.

Plus, at its heart, quantum rules rely on probabilities — quantum mechanics only reproduces classical physics on average. Based on these two insights, Bohr argued that a quantum theory can never explain classical physics. In other words, atoms and their ilk operate under one set of rules, and trains and people operate on another set of rules. They can and must be connected via the Correspondence Principle, but otherwise they live separate and parallel lives.

Was Bohr right? Some physicists argue that we just haven't worked hard enough, and that we do fundamentally live in a quantum world, and that we can reproduce classical physics from purely quantum rules. Other physicists argue that Bohr nailed it and we don't need to talk about it anymore. Most just keep their heads down and crunch through the math without worrying about it too much.

But still, it's something to think about.

Learn more by listening to the episode "Why can't I quantum tunnel myself?" on the Ask A Spaceman podcast, available on iTunes and on the Web at http://www.askaspaceman.com. Thanks to Roberts L., Lieven S., @g33ksquared, James W., Benjamin T., @newportfloat, @smattywood, and Maria A. for the questions that led to this piece! Ask your own question on Twitter using #AskASpaceman or by following Paul @PaulMattSutter and facebook.com/PaulMattSutter.