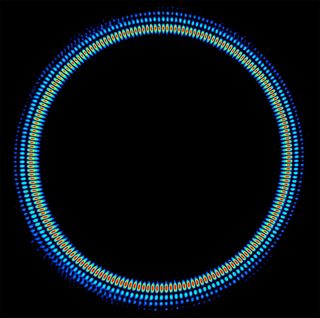 Here, a false-color image of a laser beam showing a superposition of entangled photons spinning in opposite directions.
(Image: © Copyright: Robert Fickler/University of Vienna)

Quantum physics is the science of the very small. But physicists are making it bigger, setting records for the size and energies of objects they can get to exhibit quantum effects.

Now physicists at the University of Vienna in Austria have "virtually intertwined" or entangled two particles spinning faster than ever in opposite directions. Entanglement occurs when two particles remain connected so that actions performed on one affect the other, despite the distance between them. (Einstein referred to this eerie connection as "spooky action at a distance.")

In the new study, Anton Fickler and his colleagues entangled two photons that had a high orbital angular momentum, a property that measures the twisting of a wave of light. In quantum physics, particles such as photons can behave as particles and waves.

"It's a stepping stone on the development of new technologies," said Anton Zeilinger, director of the Institute for Quantum Optics and Quantum Information and a co-author of the study, which is detailed in the Nov. 5 issue of the journal Science.

Such entanglement experiments have been carried out for decades. In this case, though, the researchers did something a bit different. They created entangled photons and gave them lots of angular momentum, more than in any experiment before.

Usually the energy contained in a photon is very small: its quantum number is low. At higher energies, this changes. Quantum physics and "normal" or classical physics start to look similar when quantum numbers get high; this is called the correspondence principle, and it applies to many areas of physics.

To create entangled photons, Fickler and his team sent a laser through a beam splitter, dividing the laser beam into two. Two photons were sent down separate optical fibers and their waves were twisted, and twisted, and twisted some more, ramping up their angular momentum — imagine a wave shaped like a spiral, spinning faster and faster. [Twisted Physics: 7 Mind-Blowing Findings]

Eventually, there was enough angular momentum in the photons that their quantum numbers — the units their momentum is measured in — differed by a factor of 600, a higher value than any seen previously. The photons spinning rapidly in opposite directions, meanwhile, were still entangled.

They knew this because when particles are entangled, measuring the quantum state (in this case the angular momentum and orientation) of one particle immediately tells you the quantum state of the other, no matter where it is. Since they had the ability to measure both the researchers could confirm entanglement.

(Though this transfer of information between the particles is instantaneous, entanglement can't be used for faster-than-light communication because it is impossible to set the quantum state beforehand, as you would in a message).

This shows that entanglement effects can be seen at high energies, meaning closer to the macroscopic world we all know and interact with. "It means we have to take the correspondence principle with a large grain of salt," Zeilinger said.

Just as importantly, the experiment shows that the only barrier to applying certain kinds of quantum effects is technical — there is no physical reason that one shouldn't be able to see quantum phenomena at high enough energies that they would bleed into the visible world, though that will take some time to do.