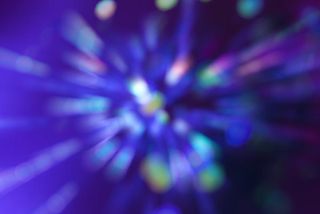 What do you think the world would look like if we could see such higher-order images, in which two tiny particles are entangled even when separated by large distances in space?
(Image: © optimarc | Shutterstock)

Quantum physics deals with the realm of the very small, and most of us never expect to see the weird world it describes. But could we? Recently, scientist Geraldo Barbosa of Northwestern University designed an experiment to answer that question.

The quantum effect Barbosa is hoping to see is called quantum entanglement, in which two or more particles can become "entangled" so that even after they are separated in space, when an action is performed on one particle, the other particle responds immediately.

A common experiment illustrating entanglement is to fire a laser at a special type of crystal. Occasionally a photon particle from the laser "splits" into two. The energy and momentum of the two new photons each add up to the value of the one originally fired.

These two "daughter" photons are entangled — if you look at the state of one photon, you know the state of the other, instantly. Einstein described this eerie connection as "spooky action at a distance."

Next, the physicists change the form of the laser beam in the experiment to create an image. They have found that the image isn't visible unless two detectors are able to "see" the photons at the same time.

While these physics experiments rely on detectors to "see" the photons and the resulting images, Barbosa foresees setting up an experiment in which a person's retinas would act as the detectors. [Stunning Photos of the Very Small]

Spooky action in the lab

The entangled photons have opposite polarization states: in other words, their waves are oriented differently. (On a quantum level, particles can behave like waves, and waves like particles.)

In these experiments when only one photon is detected, it could be in any polarization state and it can hit the detector at any time. That means scientists can't tell whether the photon hitting their detector is from the entangled duo. Without that knowledge, a person can't reconstruct the image these photons are meant to create.

But when both entangled photons are detected, you can figure out the photon's polarization state. Knowing one, you know both, and can recreate the image. The "spooky" part is that by observing either one of the photons you've eliminated all the other possibilities — both observed photons must have the polarization states you see. But how does the entangled photon "know" what state to be in? Relativity says that you can't have information travel faster than light. Observing entangled photons, though "forces" them into a certain state at the same time. [10 Effects of Faster-Than-Light Discovery]

Essentially, the information in both photons is added to recreate the original image. This experiment has been done many times.

But what would happen if the two detectors were human retinas? Would a person see the higher-order image or just the classical one, the flash of light?

Ordinarily, we see things by perceiving the intensity of the light in several wavelengths. Mixing various wavelengths makes up all the various colors and saturations we perceive.

This situation would be different — if brains could see quantum effects like entangled photons, one would expect a different image when looking with one eye than with both. This is a deeper question than it may seem, because if people can see such images, it means our macroscopic brains can pick up subtle, microscopic quantum effects.

Next step in quantum vision

Barbosa said there are still difficulties with setting up such an experiment. One problem is the signal-to-noise ratio in human neurons. We can't perceive individual photons even though they hit our retinas, as it takes a certain number of photons hitting our eyes for our brains to interpret the signal as, for example, a flash of light.

In his paper, which is posted on the physics pre-print website arXiv, Barbosa notes that it is far from clear that one could generate enough photons to trigger a response from the human retina — at least seven photons are necessary to do that, and they would all have to be entangled.

Robert Boyd, professor of optics at the University of Rochester, said he doesn't see anything in principle wrong with the idea. "Even here, there are two possibilities," Boyd wrote in an email to LiveScience. "One is that the human brain simply does not work in the manner that Barbosa proposes. The other is that it does, but that the effect is so weak as to be unobservable."

Barbosa, meanwhile, said he has been thinking about this for a while —he did some of the first experiments with quantum images in his lab in 1994. And he sketches out some of the equipment that would be needed to make the experiment work, such as special goggles to get the photons to the right part of the retina.

"This would only indicate that the complex neural system is able to process quantum signals —an amazing feature," Barbosa wrote.