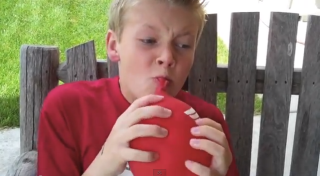 Most kids would agree: Sucking a lungful of helium out of a balloon makes your voice sound hilarious. But contrary to popular belief, the switch from air to helium gas doesn't actually increase the pitch of your voice (at least not very much). Instead, it affects a much more mysterious property of the sound, called "timbre." Rather than chirping high notes like Tweety Bird, you start quacking words like Donald Duck.

But why does helium affect your voice with that reedy tone?

First, here's what's happening inside your throat when you talk: According to acoustics expert John Smith, a biophysicist at the University of New South Wales (UNSW) in Sydney, Australia, you generate sound by rapidly vibrating two small flaps of mucous membrane, called vocal folds, in your voice box. The back-and-forth motions of these folds interrupt the flow of air from your lungs to create "puffs" of sound.

If your vocal folds wiggle back and forth 100 times each second, they produce puffs with a frequency of 100 beats per second (Hz). Additional motions of the vocal folds, such as collisions with each other, generate additional frequencies that are multiples of that fundamental frequency: "harmonics" at 200 Hz, 300 Hz, 400 Hz and so on.

All these frequencies travel together through the vocal tract — the tubelike cavity leading from the voice box up through the throat and mouth to the outside world. Depending on its shape, this tract resonates with certain harmonics generated by your vocal folds, meaning it vibrates in time with them. In doing so, the vocal tract amplifies those resonant harmonic frequencies, making them louder.

So, the harmonics created by your particular vocal folds paired with the shape of your particular vocal tract produce a unique collection of resonant frequencies that, taken together, give your voice its distinctive sound quality, or timbre. [The Physics of Loudmouths: Why Some Voices Carry]

The wavelengths that resonate with the vocal tract depend only on its shape — i.e., the resonant harmonics are the ones whose consecutive peaks fit snugly in the vocal tract — so their wavelengths stay the same regardless of whether the tract is filled with helium gas or air. (Put differently, the gas molecules inside the tract oscillate back and forth the same distance regardless of what molecules they are.)

That means the frequencies of the resonant harmonics must increase in a helium-filled cavity instead. According to Smith and colleagues in "Physics in Speech," a reference article on the UNSW website, resonant frequencies are several times higher in a vocal tract filled with helium compared to one filled with air.

And that means certain high-pitch components of your voice become amplified relative to the low-pitch components, drastically changing the overall timbre of your voice. "There is less power at low frequencies so the sound is thin and squeaky," the UNSW physicists write.

One might wonder why ducks always sound the way they do, despite breathing regular air. According to the experts, "an articulate but otherwise standard duck would have a shorter vocal tract than ours so, even while breathing air, Donald [Duck] would have resonances at rather higher frequencies than ours."