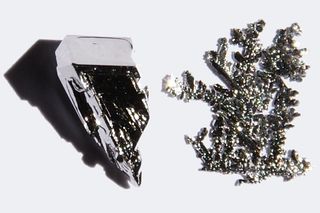 Two ultrapure platinum crystals, about 1 centimeter each. Together, they weigh about 1 gram. Photo from Images-of-Elements.com.
(Image: © Images of Platinum )

Platinum, a highly valued and desired metal, has a wide range of uses, including jewelry, catalytic converters, electrical contacts, pacemakers, medication and magnets. Because it is rare — there are only about 5 parts per billion by weight in Earth's crust, according to Chemicool — platinum tends to be very pricey, as anyone looking to buy a platinum wedding ring might discover.

Platinum is a silver-white metal — it was once known as "white gold." It is extremely resistant to tarnishing and corrosion (which makes it known as a "noble metal") and is very soft and malleable, making it easy to shape; ductile, making it easy to stretch into wire; and unreactive, which means it doesn't oxidize and is unaffected by common acids.

Platinum is one of the transition metals, a group that includes gold, silver, copper and titanium — and most of the elements in the middle of the periodic table. The atomic structure of these metals means they can bond easily with other elements.

In ancient times, people in Egypt and the Americas used platinum for jewelry and decorative pieces, often times mixed with gold. The first recorded reference to platinum was in 1557 when Julius Scaliger, an Italian physician, described a metal found in Central America that wouldn't melt and called it "platina," meaning "little silver."

In 1741, British scientist Charles Wood published a study introducing platinum as a new metal and described some of its attributes and possible commercial applications, according to Peter van der Krogt a Dutch historian. Then, in 1748, Spanish scientist and naval officer Antonio de Ulloa published a description of a metal that was unworkable and unmeltable. (He originally wrote it in 1735, but his papers were confiscated by the British navy.)

Back in the 18th century, platinum was the eighth known metal and was known as "white gold," according to van der Krogt. (Previously known metals included iron, copper, silver, tin, gold, mercury and lead.)

In the early 1800s, friends and colleagues William Hyde Wollaston and Smithson Tennant, both British chemists, produced and sold purified platinum that they isolated using a technique developed by Wollaston, according to van der Krogt This technique involves dissolving platinum ore in a mixture of nitric and hydrochloric acids (known as aqua regia). After the platinum was separated from the rest of the solution, palladium, rhodium, osmium, iridium, and later ruthenium were all discovered in the waste.

Today, platinum is still extracted using a technique similar to that developed by Wollaston. Samples containing platinum are dissolved in aqua regia, are separated from the rest of the solution and byproducts, and are melted at very high temperatures to produce the metal.

Researchers are continuing to find new uses and applications for platinum. For example, platinum is used in the development of anti-cancer drugs.

In 1844, Michele Peyrone, an Italian chemist, accidently discovered that platinum has anti-neoplastic properties (which means it prohibits the development of tumors, according to MedicineNet). Research continued, and in 1971 the first human cancer patient was treated with platinum-containing drugs.

Today, about 50 percent of cancer patients receive treatments that include this rare metal, according to a 2016 article published in the journal Chemical Reviews. These drugs include cisplatin, carboplatin and oxaliplatin, and several others in trial stages.

These so-called platinum "warheads" target cancer cells and can be programmed in a variety of ways to interact with the cancer cells that contain many receptors on their surfaces, which are responsible for many actions of the cell including growth, the authors explained. Because cancerous cells divide very rapidly, they need an excess of nourishment (such as glucose or folic acid), and these targeting systems can search the body for these various traits and deposit the medications directly within the cells, the authors said. Once the platinum is within the cells, it works with other chemotherapy drugs to prevent the cancer cells from continuously dividing, they explained.

Another benefit of using these nanodelivery systems is that they can remain in the bloodstream for longer periods of time, thus leading to better distribution and delayed releases of the medications, the article said.

Due to the large amount of platinum needed to study these anticancer drugs, refining companies were eager to become involved very early on, as described by the authors. And although the use of refined platinum in cancer drugs is beneficial to many, those who work on platinum mines do have to be careful because inhaling or coming into direct contact with platinum salts (created from the purifying process and prior to being melted into metal) can have the opposite effect by potentially causing adverse health affects such as allergic reactions, damage to internal organs, or even cancer, according to CancerTreatment.net.

Several studies, including a 2006 study published in the journal Water, Air, and Soil Pollution and a 2009 study presented at the Canadian Metallurgical Society’s annual conference have shown associations between platinum mining and adverse environmental and health effects, although more research is needed to prove the links.