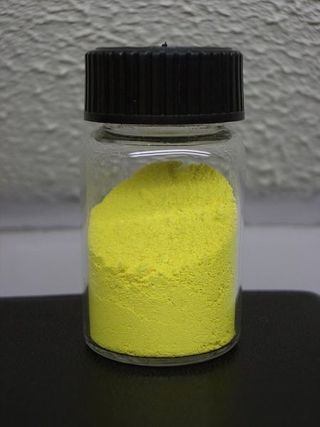 Cadmium sulfide, seen here, is one of the two compounds used to make zinc cadmium sulfide. It's commonly used as a pigment.
(Image: © W. Oelen)

The bluish-white metal that is known as cadmium is malleable, ductile and can easily be cut with a knife. Due to its excellence as an electrical conductor, cadmium is often used in electroplating and in batteries. Also, cadmium and solutions of its compounds are toxic and must be handled carefully.

Friedrich Strohmeyer, a German chemist, is credited with discovering cadmium in 1817, according to Dartmouth University, although K.S.L. Hermann and J.C.H. Roloff, German scientists, independently discovered the element in the same year. In both cases, cadmium was found in zinc oxide, which was typically used as a topical medicine at that time.

Strohmeyer, according to the Chemicool, was inspecting pharmacies in Germany. He found that several pharmacies in Hildesheim, Germany, were using zinc carbonate instead of zinc oxide in their topical medications. He took several samples of the zinc carbonate to heat and convert to zinc oxide and noticed that several samples glowed yellow. The samples were tested for iron or lead contamination, as those were the typical culprits that caused that color change. No traces of either of those elements were found, and upon further investigation, Strohmeyer found that there were traces of an unknown element. He isolated the new metal and suggested the name "cadmia" for the new element, after the Latin name for calamine (zinc carbonite).

Strohmeyer also found cadmium in many other zinc compounds, including several samples that were supposedly pure zinc, according to Chemicool. He estimated that cadmium made up between 0.1 and 1 percent pure zinc and in zinc compounds.

It wasn't widely known that cadmium was toxic until the Industrial Revolution in the mid-19th century, according to Dartmouth University, when the mining and production of cadmium and other metals greatly increased. About the same time, cadmium was used in some medicines, and many who were taking these medications ended up becoming poisoned, which is part of the reason Stromeyer, among others, was sent to inspect pharmacies.

In 1945, closer studies and regulations of cadmium arose after incidents in Japan led to residents in the Toyama province becoming ill and experiencing pain in their bones and joints. It was found that increased levels of cadmium had been introduced into the water used to irrigate the crops from nearby zinc mines. When the crops, especially rice, passed along the increased levels of cadmium to the population, the metal caused the amount of calcium in the bones and the density of the bones to decrease enough where is some cases, even simple motions caused bones to break.

Cadmium does not abundantly occur natively. Greenockite is the only mineral of any consequence that bears cadmium. It is most often found in small quantities in zinc ores, such as sphalerite (ZnS).

Cadmium mineral deposits are found in Colorado, Illinois, Missouri, Washington and Utah, as well as Bolivia, Guatemala, Hungary and Kazakhstan. However, almost all cadmium in use is a by-product of treating zinc, copper and lead ores. Today, according to the Minerals Education Coalition, cadmium is typically produced in places where zinc is refined rather than mined. Top producers of cadmium include China, Japan, Korea, Mexico, the United States, the Netherlands, India, the United Kingdom, Peru and Germany.

In 1927, the International Conference on Weights and Measures redefined the meter in terms of the wavelength of the red cadmium spectral line. This definition has since been changed.

Cadmium is used in rechargeable nickel-cadmium batteries and can be found in many devices, including cell phones, cordless power tools, cameras, computers, and in emergency power supplies and lights, according to the Minerals Education Coalition. It is also used in nuclear reactor rods to keep nuclear fission reactions under control due to its ability to absorbing neutrons.

According to the Agency for Toxic Substances and Disease Registry (ATSDR), approximately 83 percent of mined cadmium is used in batteries, 8 percent as pigments, 7 percent as coatings and platings, 1 percent as a stabilizer for plastic, and 1 percent in nonferrous alloys, photovoltaic devices, and other uses.

According to the ATSDR, people and animals are primarily exposed to cadmium through food, water and smoking. Those working directly with cadmium are also exposed via inhalation.

Foods such as leafy greens, potatoes, grains, peanuts, soybeans, sunflower seeds and tobacco leaves are known to contain high levels of cadmium, typically between 0.05 and 0.12 mg of cadmium per kilogram of produce, according to the ATSDR. Typically, nonsmokers have an average of 0.38 micrograms of cadmium per liter of blood. Levels of 1.58 micrograms of cadmium per liter of blood have been found in some groups of smokers. Cadmium concentrates in the kidneys and liver and can remain for many years and slowly leaves the body through urine and feces.

Cadmium waste from industries primarily concentrates in the soil, with small amounts entering the air through the burning of fossil fuels and the water through the industrial waste, according to Lenntech. Cadmium can then enter the food supply by plants absorbing the element through the soil. Organisms that live in the soil such as earthworms are highly susceptible to cadmium poisoning, which can severely affect the entire soil ecosystem.

Marine life, especially those who live in fresh water, including mussels, oysters, shrimp, lobsters, and fish tend to be susceptible to cadmium poisoning.

With cadmium being a known carcinogenic, much research is going into exactly how cadmium affects health. In addition to cancer and the other effects listed above, there is some evidence that cadmium exposure may be linked to obesity.

One such study is examining a relationship between cadmium exposure and obesity, which in turn can lead to many other diseases such as Type 2 diabetes and cardiovascular disease, according to the 2016 study published in Epigenomics. The study states that cadmium, and other heavy metals including lead, are ranked within the top ten environmental pollutant concerns by environmental health agencies. The exposure of these metals can potentially increase the risk of obesity.

Obesity can be caused by many factors, according to the study, and the researchers studied patterns between heavy metal exposure and obesity. Links have been found that DNA alterations do contribute to early onset obesity, and the alterations can occur due to exposure to cadmium and other heavy metals, especially during the prenatal period. Obesity has been shown to have a strong relationship with brain function, according to the study, and cadmium exposure can impact neurodevelopment potentially leading to how signaling relating to appetite in the brain works resulting in increased calorie consumption.