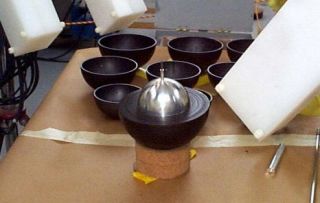 Neptunium, element 93 on the periodic table of elements, was the first transuranium element to be produced synthetically and the first actinide series transuranium element to be discovered. Its discovery came after several false findings of the element, including Enrico Fermi's attempt to bombard uranium with neutrons. That experiment resulted in the discovery of fission, or splitting atoms.

Neptunium is sandwiched on the periodic table between uranium and plutonium, which are also radioactive. All three of these elements, named after planets, have between 92 and 94 protons in their nuclei, large enough to undergo a nuclear fission reaction, or "atom splitting." Due to this capability, uranium and plutonium are both widely used in nuclear power plants and weapons.

Neptunium, however, was discovered significantly later in history than either of its periodic table neighbors, and is not widely used. Neptunium remains an important element to study because it is produced by nuclear reactions of uranium and plutonium and can last as harmful radioactive waste for millions of years, according to a 2003 report by the Pacific Northwest Nuclear Laboratory. Understanding neptunium's chemistry is essential to ensure safe long-term nuclear waste storage.

According to John Emsley in his book, "Nature’s Building Blocks: An A-Z Guide to the Elements" (Oxford University Press, 1999), Italian scientist Enrico Fermi was the first to claim he discovered element 93, in 1934. He hypothesized that elements heavier than uranium (element 92) could be created by bombarding uranium with neutrons. Theoretically, this would add one neutral mass unit to the uranium atoms, which would then undergo beta decay, or loss of a negative charge that turns a neutron into a proton, resulting in an element with 93 total protons. Fermi's experiment did not end up producing an element; instead of the neutrons fusing with the uranium atoms, they split the uranium atoms into many fragment radioisotopes. Fermi was criticized for his false claim, and did not know at the time that he had actually performed the first atom splitting, or fission, experiment.

Just four years later in 1938, Romanian physicist Horia Hulubei and French chemist Yvette Cauchois made a similar false report of discovering element 93. They claimed that they found the element in a naturally occurring mineral sample. At the time, scientists rejected this, believing no elements with more protons than uranium (transuranium elements) were present in nature.

Element 93 was accepted as an existing element in 1940 at the University of California, Berkeley. Professor Edwin McMillan and graduate student Philip Abelson used a technique similar to Fermi, but with one important difference: they used slow-moving neutrons. McMillan used a machine called a cyclotron to slow the neutrons and then directed them at a uranium-238 target. This time, the neutrons actually worked to create element 93 by fusing with the uranium atoms instead of breaking them apart. Abelson analyzed the resulting sample, and noted unusual beta radiation that showed a new isotope (later named Np-289) was present. McMillan and Abelson decided to call the element neptunium because Neptune is the next planet beyond Uranus in the solar system. The discovery was the first transuranium element to be synthesized in a lab and earned McMillan a Nobel Prize in 1951.

Although scientists used to think neptunium could only be created synthetically, trace amounts of four of neptunium's 25 isotopes have since been found in nature, according to Los Alamos National Laboratory. Uranium, found in rock, soil and water, undergoes a natural nuclear reaction that results in small amounts of isotopes Np-237 to Np-240.

The majority of neptunium, however, is anthropogenic; that is, it is created as a byproduct of reactions in nuclear power plants. Scientists can extract neptunium from spent nuclear fuel in large quantities. Because of its long half-life of 2.14 million years, Np-237 is the most abundant isotope of neptunium created. Most other isotopes of neptunium have short half-lives and decay within days.

Neptunium is a member of the actinide series, row 5f of the periodic table. This row (along with the lanthanide row above) is often depicted below and separately from the rest of the periodic table because it is too long to fit on a page with normal dimensions. All 15 actinide elements have very large atomic radii and are radioactive.

Neptunium is a silver metal and is very reactive, with four different oxidation states. When it combines with other elements it occurs as different colored solutions (purple, yellow, green and pink). Even on its own, neptunium occurs as three different allotropes, or physical forms, depending on the temperature. It is the densest of the actinides and can remain a liquid for the largest temperature range of any known element.

Can we use it?

Neptunium's current applications are limited. Neptunium has only been considered, not actually used, as a fissile nuclear fuel. However, neptunium-237 is used to create plutonium-238, which is then used in special energy generators that can power satellites, spacecraft and lighthouses for a long period of time. Neptunium-237 is also used in nuclear physics research as a part of a device that detects high-energy neutrons.

Can it harm us?

There may be radioactive neptunium in your house! Neptunium accumulates in a common household item: ionizing smoke detectors. To detect smoke, another actinide element, americium-241, emits radiation and turns into neptunium-237. But no need to worry: the amount of radioactive material in smoke detectors is negligible and causes no harm to human health, according to Emsley. Smoke detectors contain less than 0.00000001 ounces (0.0000003 grams) of americium, which decays so slowly that only about 0.2 percent of this already small amount converts to neptunium each year.

Scientists are, however, concerned with the long-term storage of neptunium present in spent nuclear fuel, according to a 2005 article published by Berkeley Lab. Although neptunium makes up only a small percentage of total radioactive waste, it poses a particular threat because it is long-lasting and hard to extract. Amy Hixon, an assistant professor at the Notre Dame College of Engineering, has studied the less familiar actinide elements and how to best contain them.

"The neptunium present in a used nuclear fuel rod can last for millions of years, and I'm not exaggerating," Hixon said as she explained the reality of containing neptunium. Her lab studies how neptunium and other actinides move through materials simulating geological repositories, like the one proposed for Yucca Mountain in Nevada. Though these deep storage sites are generally accepted as the safest long-term storage, there are none currently operating in the United States. The Yucca Mountain Nuclear Waste Repository was defunded under the Obama administration in 2011. The Trump administration has cut all funding for deep borehole waste research, but Congress may reconsider funding in the next budget cycle for 2018.