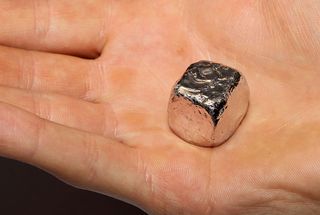 Rhodium is a silver-white metallic element that is highly reflective and resistant to corrosion. It is considered the rarest and most valuable precious metal in the world — well above gold or silver. The name rhodium comes from the Greek word "rhodon," meaning rose, named for the rose-red color of its salts.

Rhodium is one of the of the six platinum group metals: platinum, palladium, rhodium, osmium, iridium and ruthenium. It is also classified as a noble metal, meaning that it does not react to oxygen easily, acts as a fantastic catalyst and is resistant to corrosion and oxidation. Some common characteristics of the platinum group metals include high melting points, general non-toxicity, and resistance to wear, oxidation and corrosion, according to Chemistry Libretexts.

Rhodium is the rarest of the platinum group, only occurring up to one part per 200 million in the Earth's crust, according to Chemistry Libretexts. Rhodium has lower density and a higher melting point than platinum. Rhodium it is unaffected by air and water up to 1,112 degrees Fahrenheit (600 degrees Celsius), according to Lenntech.

Rhodium was discovered in 1803 by English chemist William Hyde Wollaston shortly after he had discovered the element palladium. Wollaston extracted rhodium from a piece of platinum ore that he had obtained from South America. Rhodium often occurs with deposits of platinum and is commonly obtained from the mining and refining of platinum.

Wollaston was first alerted to the possibility of a new element existing in platinum ore by the French chemist Hippolyte-Victor Collet-Descotils, who believed that the red color of some platinum salts was due to the presence of an unidentified metal. After a series of chemical reactions, Wollaston was able to remove the platinum and palladium from the sample of platinum ore. He was left with a dark red powder — which turned out to be sodium rhodium chloride, according to Jefferson Lab.

The main use for rhodium is in catalytic converters designed to clean vehicle emissions. Rhodium — often together with palladium and/or platinum — accomplishes this by reducing nitrogen oxide in exhaust gas. Without rhodium catalysts, the air in our cities would be much worse due to vehicle exhausts.

Since rhodium is quite brilliant and resistant to tarnishing, it is used as a finish for jewelry, searchlights and mirrors. It is also alloyed with platinum for aircraft turbine engines. In the chemical industry, rhodium is used as a catalyst in the making of nitric acid, acetic acid and hydrogenation reactions, according to the Royal Society of Chemistry (RSC).Other uses for rhodium are coating optic fibers, crucibles, thermocouple elements and headlight reflectors. Since it has a low electrical resistance and is highly resistant to corrosion, it is used as an electrical contact material as well, according to RSC.

Rhodium is often alloyed with platinum and iridium to make an oxidation-resistant metal that can stand against high temperatures. These alloys are used in furnace windings, pen nibs, phonograph needles, high-temperature thermocouple and resistance wires, electrodes for aircraft spark plugs, bearings and electrical contacts, according toLenntech.

Rhodium has no known biological use and no known use for life processes. While some compounds of rhodium are carcinogenic, there are almost no reported cases of humans being affected by this element in any way. This may be because rhodium compounds are encountered so rarely. Test on plants have shown that it is the least toxic member of the platinum group of metals, according to Lenntech.

Although rhodium is generally considered non-toxic, some of its compounds are toxic and carcinogenic. Naturally occurring rhodium consists of just one stable isotope: Rh-103.

Commercial rhodium is generally obtained as a byproduct of copper and nickel refining. In nature, rhodium can occur uncombined or with other platinum minerals. It can be found in river sands in North and South America and in copper-nickel sulfide ores in Ontario, Canada, according to the Royal Society of Chemistry.

Due to its rarity, the small market size and the concentrated supply — South Africa alone produces roughly 80 percent of the world's rhodium — prices are typically volatile, according to Mining.com. For example, rhodium briefly reached $10,025 an ounce just before the 2008 financial crisis hit, but then plunged 90 percent before the end of the year. In 2017, the price of rhodium more than doubled, adding $1,000 an ounce since hitting 12-year-lows mid-2016.

Although rhodium seems to have found a solid industry niche in cleaning car exhausts, many new research projects are showing that the precious metal may hold much more potential, particularly in its primary role as a catalyst.

In one such study, Swiss researchers at the Paul Scherrer Institute (PSI) and the ETH Zurich developed a new chemical process that uses the sun's thermal energy to convert carbon dioxide and water into high energy fuels. This chemical process involves a new material combination of cerium oxide and small amounts of rhodium as a catalyst. Their discovery is a major step toward the chemical storage of solar energy (which has been a very tricky problem for scientists). Their new findings are published in the journal Energy and Environmental Science.