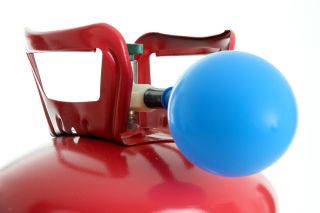 The world is facing a critical helium shortage, which threatens much more than the party-balloon industry.

An odorless and colorless gas, helium (He on the periodic table) is the second-most-abundant element in the universe after hydrogen, but it's not easy to find or store in usable quantities — most of the helium in the atmosphere escapes into space, and our current helium supplies are largely extracted from underground natural-gas reserves.

The United States is the global leader in helium production, producing about 75 percent of the world's helium. About half of that is stored outside Amarillo, Texas, in the country's Federal Helium Reserve, a vast subterranean complex of storage reservoirs and pipelines that extend to natural-gas fields as far away as Kansas. [End of the World? Top 10 Doomsday Fears]

But the looming helium shortage is actually the government's fault, according to Science magazine. The U.S. Bureau of Land Management (BLM), which manages the Federal Helium Reserve, sells off helium at below-market rates, encouraging waste and discouraging the development of new sources.

"If … companies can buy the federal helium gas at a relatively low price, there is less incentive to develop it," physicist Moses Chan, a member of the National Academy of Sciences panel studying the helium reserve, told Marketplace.org.

In 1996, Congress mandated that the federal government get out of the helium business altogether, so the BLM is selling off its existing supply until it recoups the costs of producing it. That point will come in October, after which point the government cannot sell any more helium.

As a result, the United States and much of the industrialized world now faces an imminent "helium cliff." Legislation that intended to address this problem by allowing continued helium sales after October was passed by the U.S. House of Representatives in April, but the Senate has yet to pass its own version of the bill, according to the Wall Street Journal.

"We're running out of time," David Isaacs, of the Semiconductor Industry Association, told the Journal. "We're positioned to get it done, but there's certainly no guarantee — certainly not in this Congress."

The Federal Helium Reserve got its start shortly after World War I, when helium was used to float military reconnaissance aircraft. Since then, helium has proven to be indispensable in a wide range of industrial and medical uses.

Magnetic resonance imagery (MRI) relies on helium to regulate the powerful magnets needed to create MRI scans, which are cooled to minus 452 degrees Fahrenheit (minus 269 degrees Celsius). Indeed, the fact that helium has the lowest boiling and melting points of all the chemical elements — liquid helium is the only liquid that cannot be solidified by lowering its temperature — is what makes it so irreplaceable in so many industries.

Helium is also essential to the manufacturing of computer chips, optical fiber and medical lasers. It's often needed for rocket-engine testing, arc welding, air-to-air missile guidance, and other civilian and military uses, according to the BLM. (Party balloons and parade floats use just a tiny fraction of the world's helium supply.)

There are some plans in place to address the current helium shortage, including a new helium plant in Wyoming and increased development overseas. And assuming that demand for helium remains strong, "new technologies for extracting and refining helium … would bring new sources of helium to the market," according to the BLM.