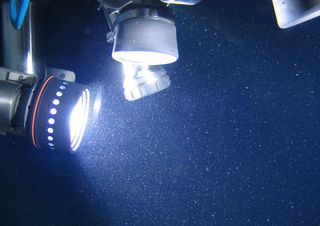 A submersible dubbed Jiaolong in the Mariana Trench on June 27, 2012, in the western Pacific Ocean.
(Image: © VCG/VCG via Getty Images)

As if preparing for battle, some shrimplike creatures suit up in aluminum armor to survive the ravages of the deepest part of the oceans, a new study finds.

Amphipods are little crustaceans found in most waters on Earth. One species, Hirondellea gigas, dwells at the bottom of the sea — the Challenger Deep in the Mariana Trench, some 35,797 feet (10,911 meters) down.

In the extreme pressures of the deep sea, the calcium carbonate that makes up the shells of amphipods and many other marine animals reacts more readily with carbon dioxide to dissolve more easily in water — essentially leaving their soft bodies naked and vulnerable. As such, amphipods typically are not found below about 16,400 feet (5,000 m), which made H. gigas' presence in the Challenger Deep a mystery. [Photos: The Freakiest-Looking Fish]

The researchers analyzed several H. gigas they collected from the Challenger Deep at a depth of 25,751 feet (10,897 m). The crustaceans measured more than 1.2 inches (3 centimeters) from head to tail.

The scientists found that the H. gigas exoskeleton contained aluminum on its surface. But how did the little creature find this metal, since it's sparse in seawater? The researchers discovered that the crustacean uses sugar-based chemicals in its guts to extract aluminum ions from the seafloor mud that it swallows as it feeds on plant debris raining down from the surface. It generates these sugar-based molecules from sugars it gathers from this plant debris.

The gel forms an impermeable barrier over the creature's exoskeleton. "As a result, the calcium carbonate in the exoskeleton is not dissolved," Kobayashi added.

This amphipod is the first known organism to extract aluminum from clay to help it live in the deep sea, Kobayashi said. He suggested this newfound biological process might one day lead to an environmentally friendly way to produce aluminum.

The scientists detailed their findings online April 4 in the journal PLOS ONE.