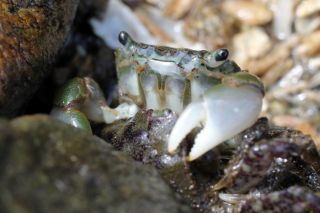 Researchers found that shore crabs (Hemigrapsus oregonensis) exposed to the drug marketed as Prozac were taking more risks and fighting with other crabs more.
(Image: © Randimal/Shutterstock)

Crabs drugged with Prozac are behaving badly, or at least in risky ways, new research finds.

The researchers weren't interested in finding the right dose of the antidepressant (generic name fluoxetine hydrochloride) to treat anxious or depressed crabs. Rather they were interested in seeing how the drug, which makes its way into the crabs' ocean home through contaminated runoff, might affect the animal's behavior, the study researchers said.

In particular, they found that the bay shore crab (Hemigrapsus oregonensis) stops hiding from its predators when exposed to low levels of fluoxetine hydrochloride, the researchers wrote online Sept. 30 in the journal Ecology and Evolution.

"The changes we observed in their behaviors may mean that crabs living in harbors and estuaries contaminated with fluoxetine are at greater risk of predation and mortality," study researcher Elise Granek, a professor in the Department of Environmental Science and Management at Portland State University, said in a statement. [Octopus vs. Crab Showdown Ends with a Twist in Startling Video]

Fluoxetine is a class of antidepressant called an SSRI, or selective serotonin reuptake inhibitor, meaning it indirectly boosts the amount of mood-altering serotonin available to the brain. It's designed to affect people's brains in a way that can alleviate depressive symptoms. But past research has shown that when a person's fluoxetine-filled waste enters waterways, it can alter the shore crabs' reproductive, molting and digestive behaviors; it may even cause the crabs to abandon their nocturnal schedule, according to the paper.

However, few studies have looked at whether the drug changes how these animals behave in the face of other species.

Usually studies that try to simulate the impacts of pollution on ocean-dwellers fall to a common problem: the ocean is very big and fish tanks are very small — the pollution levels that are shown to affect animal behavior in the lab tend to be unrealistic in the grand scheme of things. But that wasn't the case for the new study, as the concentrations chosen were just one-tenth of those found in a 2008 study in the Journal of Chromatography A, which relied on surveys of coastal areas, the researchers said. That study found up to 300 nanograms per liter of water of Prozac.

In a laboratory re-creation of the crabs' oceanic habitat, Granek and her colleagues dosed the water with small amounts of fluoxetine and watched how the animals behaved over several weeks. Each crab tank contained a large male, a smaller male and a small female, and there were 10 tanks for each dosage of fluoxetine: one group had 3 nanograms of fluoxetine per liter of sea water, one had 30 nanograms per liter and a third control group had no medication.

Over time, the high-dose group engaged in risky behaviors like foraging for food even after a predator crab, Cancer productus, was added into the mix. They even continued to forage during the day when the shore crab usually hides away, blending into nearby pebbles for protection.

The drugged crabs also fought among each other more often than those not exposed to fluoxetine. Of the 90 drugged crabs (across doses), 25 were killed by the predator crab and another six male crabs died in battle with another shore crab. Thirteen of the 25 crabs that were eaten by a predator were in the most heavily-medicated group, as were four of the six crabs that died in a duel.

Over time, the highest-dose group showed even more risky behaviors and fights: These crabs were most likely to engage in risky activity after being in their medicated tanks for seven to nine weeks, the researchers said. And all of this is caused by pharmaceutical concentrations lower than those found in polluted areas.

"With growing human populations in coastal zones, increasing use of antidepressants like fluoxetine is expected, suggesting higher future concentrations in the marine environment," the researchers wrote in their paper, adding that their study suggests the antidepressants could impact crab behavior.