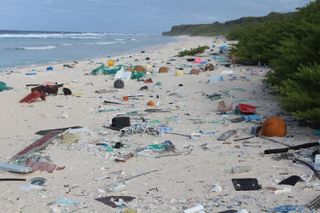 Plastic pollution covers East Beach on Henderson Island, an uninhabited island in the South Pacific Ocean that is considered one of the world's most remote.
(Image: © Jennifer Lavers)

A tiny, uninhabited piece of land in the South Pacific Ocean, called Henderson Island, is considered one of the most remote islands in the world. But now, researchers say it has earned a much more worrisome new title: the world's most polluted island.

Henderson Island is so remote thatit's visited only every five to 10 years, for research purposes, and is listed as a World Heritage Site by the United Nations Educational, Scientific and Cultural Organization (UNESCO). But this isolation from humanity has not prevented the island's beaches from becoming filled with trash. In a new study, researchers estimate that 37.7 million pieces of plastic — amounting to 17 tons of plastic debris — litter the beaches of Henderson Island.

With as many as 671 pieces of debris per square meter (about 62 pieces per square foot), Henderson Island has the densest plastic pollution ever recorded anywhere on Earth, the researchers said. [In Photos: World's 10 Most Polluted Places]

The island sits near the center of the South Pacific Gyre ocean current, which means litter from South America or debris dropped by fishing boats culminates at the island.

"Far from being the pristine 'deserted island' that people might imagine of such a remote place, Henderson Island is a shocking but typical example of how plastic debris is affecting the environment on a global scale," study lead author Jennifer Lavers, a researcher at the University of Tasmania's Institute for Marine and Antarctic Studies (IMAS), said in a statement.

Lavers was part of the most recent scientific expedition to the island. She said just one beach on Henderson Island will have more than 3,750 new pieces of litter wash up every day.

The true total amount of debris on Henderson Island is likely much larger, Lavers said, because the new study was limited to debris samples that were both larger than 0.08 inches (2 millimeters) and located up to 4 inches (10 centimeters) deep in the sandy beaches. Also, pollution along the island's rocky coastline and cliffs has not yet been measured, the researchers said.

Henderson Island's polluted beaches show that there is no escaping plastic pollution, Lavers said. More than 300 million tons of plastic are produced each year, and most is not recycled, according to Lavers. Plastic's durability and buoyancy make its impact on the ocean, and ocean inhabitants, a long-term concern.

"Plastic debris is an entanglement and ingestion hazard for many species, creates a physical barrier on beaches to animals such as sea turtles, and lowers the diversity of shoreline invertebrates," Lavers said in the statement. "Research has shown that more than 200 species are known to be at risk from eating plastic, and 55 percent of the world's seabirds, including two species found on Henderson Island, are at risk from marine debris."

As a World Heritage Site, Henderson Island has a protection and management plan that includes prevention of marine pollution, according to UNESCO. However, the UNESCO listing does not detail any environmental efforts underway to clean up the plastic debris.

The study of Henderson Island's world-record debris is detailed in a paper published online today (May 15) in the journal Proceedings of the National Academy of Sciences.