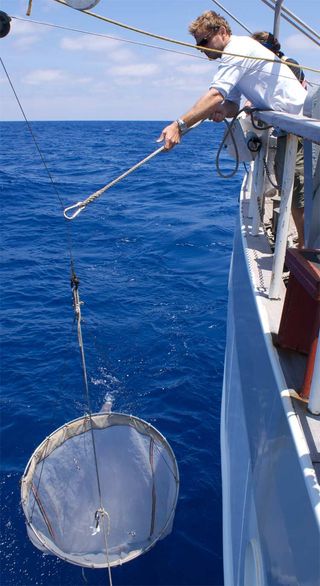 Giora Proskurowski deploys a net collect samples that help estimate how much plastic debris is in the ocean.
(Image: © Sea Education Association)

An oceanographer who noticed a disappearing act in which the surface of the ocean went from confetti-covered to clear now suggests wind may driving large amounts of trash deeper into the sea.

Oceanographer Giora Proskurowski was sailing in the Pacific Ocean when he saw the small bits of plastic debris disappear beneath the water as soon as the wind picked up.

His research on the theory, with Tobias Kukulka of the University of Delaware, suggests that on average, plastic debris in the ocean may be 2.5 times higher than estimates using surface-water sampling. In high winds, the volume of plastic trash could be underestimated by a factor of 27, the researchers report this month in the journal Geophysical Research Letters.

Plastic waste can wreak havoc on an ecosystem, harming fish and other organisms that ingest it, possibly even degrading a fish's liver; the trashy bits also make nice homes for bacteria and algae that get carried to other areas of the ocean where they could be invasive or cause other problems, the researchers noted. [Video Reveals Sea Lions Strangled By Debris]

In 2010, the team collected water samples at various depths in the North Atlantic Ocean. "Almost every subsurface tow we took had plastic in the net," Proskurowski told LiveScience, adding that they used a specialized tow net that isolated certain layers of the water, so it would only open at a specific depth and close before being pulled up.

Next, they combined the trash tally with wind measurements to come up with a mathematical model, which allowed them to calculate the amount of debris at different depths on average as well as look at how that amount changed with different conditions, such as on a windy day.

They found 2.5 times more debris in the layers of water below the "surface water" (defined as the top 9.8 inches or 25 centimeters) as was found in that surface section. The debris was distributed down to a depth of about 65 to 82 feet (20 to 25 meters).

The findings mean the estimates of plastic litter in the ocean, conducted by skimming the surface water only, may in some cases vastly underestimate the true amount of plastic debris there.

"The scope of the [plastic debris] problem is not just at the very surface but goes down to 20 meters or so, and that plastic is distributed throughout this layer," Proskurowski said during an interview.

He and his colleagues plan to publish a simplified version of the model so others investigating ocean plastics can use it.