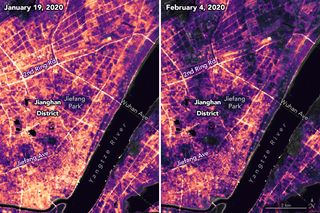 Night lights in Wuhan, China, show the difference in human activity between late January and early February 2020, when the COVID-19 coronavirus spread through the city.
(Image: © Joshua Stevens/ NASA)

As the coronavirus pandemic forced much of the world into lockdown by early April, daily global carbon dioxide emissions fell by 17% compared with 2019 levels, a new study published May 19 in the journal Nature Climate Change found.

This reduction — which is primarily the result of disruptions to ground transportation and industry — may be one of the single largest emission drops in recorded history, the researchers said. However, they added, it is also likely to be temporary; with lockdown measures already being rescinded, daily global emissions are estimated to return close to 2019 levels by the end of the year, barely affecting the enormous amounts of carbon dioxide clouding our atmosphere and warming our planet more and more each year.

"Although this is likely to lead to the largest cut in emissions since World War II, it will make barely a dent in the ongoing build-up of carbon dioxide in the atmosphere," Richard Betts, Head of Climate Impacts Research at the Met Office Hadley Centre in England, said in a statement. (Betts was not involved in the study.) "It’s like we’re filling a bath and have turned down the tap slightly, but not turned it off — the water is still rising, just not as fast. To stop the bath overflowing, we need to turn the tap off."

Related: 10 signs Earth's climate is off the rails

In the new study, the researchers analyzed lockdown measures in 69 countries, which account for 97% of global carbon dioxide emissions. The team looked at data from six key economic sectors — including ground transportation, air transportation, power, industry, public buildings and private residences — to estimate the changes in daily emissions from each sector between January and April 2020, compared with mean levels from the same period in 2019.

The largest drop in carbon emissions came from the reduced traffic from cars, trucks and buses, accounting for roughly 43% of the total estimated emission reduction, the researchers found. Reductions in the power and industrial sectors accounted for another combined 43% of the total.

"Decreases in emissions in 2020 were largest in China where industry and communities first locked down, followed by the U.S., Europe and then India," study co-author Pep Canadell, a researcher at the Commonwealth Scientific and Industrial Research Organization (CSIRO) in Australia, said in a statement.

The peak 17% daily decline occurred on April 7, when China, the U.S., India and most other major carbon-emitting countries were all under a high-level of lockdown simultaneously, Canadell added.

Some individual countries saw daily emission drops of up to 26%, the researchers found — however, most of those reductions are already going away. The team estimated that if economic activity returns to pre-crisis levels by mid-June, total global emissions might decline by an average of 4% by the end of 2020. If certain restrictions remain in place until the end of the year, average emissions may decline by 7% from last year.

"For the climate, this month-long wake in otherwise record-high emissions is entirely insignificant," Joeri Rogelj, a climate change lecturer at Imperial College London not involved in the study, said in the statement. "Even worse, massive economic stimulus measures are now being announced and there is a high risk that short-sightedness will lead to governments … putting their money towards highly polluting sectors."

"If we are to limit global warming to just 2.7 degrees Fahrenheit (1.5 degrees C) then we need to make global cuts of at least 7% per year for the next 30 years," said Mark Maslin, a professor of climatology at University College London (also not involved in the study). "The pandemic shows us that major structural changes in the transport and energy systems are required."