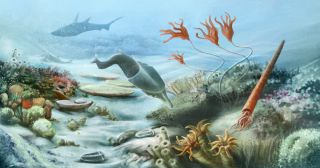 The Silurian Period occurred from 443 million to 416 million years ago. It was the third period in the Paleozoic Era. It followed the Ordovician Period and preceded the Devonian Period. During this time, continental landmasses were low and sea levels were rising. This meant rich shallow sea ecosystems with new ecological niches. Silurian fossils show evidence of extensive reef building and the first signs that life beginning to colonize the new estuary, fresh water and terrestrial ecosystems.

The supercontinent Gondwana had drifted southward and covered most of the southern latitudes. Much of the northern half of the planet was ocean with two smaller continents, Laurentia and Baltica, near the equator. Another micro-continent, Avalonia, rifted from the northern edge of Gondwana and drifted northward. Beginning in the late Ordovician and continuing throughout the Silurian and into the Devonian, the three northern continents collided, forming the new supercontinent, Euramerica. This collision resulted in a major mountain building event known as the Caledonian Orogeny. The hills and mountains of Scotland, Ireland, Wales and the northern Appalachians are remnants of this event, as are the mountains of Sweden and Norway.

Much of the landmass that would become western North America was under a shallow ocean for much of the Silurian Period. These shallow waters enabled sunlight to penetrate, and marine animals underwent rapid differentiation. Silurian fossils show extensive coral reefs built from tabulate and horn corals with calcium carbonate skeletons. In the early Silurian, a class of jawless fish, Agnatha, similar to modern hagfish and lampreys, was most common. In the mid-Silurian, the first species of Romundina, a Placoderm — a primitive armored fish with a cartilage skeleton — is earliest fish known to have developed jaws.  [Related: Fossil Fish is Oldest Creature With a Face]

Eurypterids were the apex predators of the Silurian oceans. Eurypterids were arthropods, probably most closely related to modern horseshoe crabs. They had a semi-circular anterior carapace followed jointed section and a long tapering tail. Most species had two pairs of jointed walking legs followed by a pair of paddle-shaped swimming appendages. Some had a spike on the end of their tails, which may have been used to inject venom into prey, giving rise to the common name “sea scorpion.” By the Devonian Period, these animals became the largest known arthropods to ever have lived on Earth.

During the Silurian Period, the climate was generally warm and stable, in contrast to the glaciers of the late Ordovician and the extreme heat of the Devonian. A warm, stable climate provided for one of the most significant developments to take place during the Silurian Period: the arrival of the first plants to colonize the land. Lichens were probably the first photosynthetic organisms to cling to the rocky coasts of the early continents. When organic matter from decaying lichens joined the action of erosion to wear away rock, the first real soil began to build up in shallow, protected estuaries. Bryophytes such moss, hornworts and liverworts first appeared in the late Ordovician. The first known plant to have an upright stalk, and vascular tissue for water transport, was the Cooksonia of the mid-Silurian deltas. This little plant was a few centimeters high with a branched structure with small bulbous tips. It lacked true leaves, suggesting that the stalk developed to disperse spores and was not itself photosynthetic. The first known air-breathing animals were arthropods. Millipedes, centipedes and the earliest arachnids first appear in the Silurian. Since arachnids are exclusively predatory, this represents the first terrestrial food web.