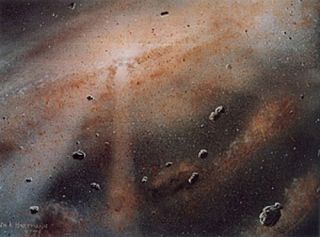 The Precambrian is the name given for the first super eon of Earth’s history. This division of time — about seven-eighths of Earth's history — lasted from the first formation of the planet (about 4.6 billion years ago) to the geologically sudden diversification of multicellular life known as the Cambrian Explosion (usually dated at about 542 million years ago).

The Precambrian is usually considered to have three eons: the Hadean, the Archean and the Proterozoic. Some scientists recognize a fourth eon, which they call the Chaotian, which predates the others and is the time of the first formation of our solar system.

The Hadean Eon occurred 4.6 billion to 4 billion years ago. It is named for the mythological Hades, an allusion to the probable conditions of this time. During Hadean time, the solar system was forming within a cloud of dust and gas known as the solar nebula, which eventually spawned asteroids, comets, moons and planets.

Astrogeophysicists theorize that about 4.52 billion years ago the proto-Earth collided with a Mars-size planetoid named Theia. The collision added about 10 percent to Earth’s mass. Debris from this collision coalesced to form Earth’s moon. It is hypothesized that Theia’s iron core sank to the center of the still molten Earth, giving this planet’s core enough density to begin to cool. Lighter elements “floating” on the surface began to form a scum of crustal materials. This early crust was frequently turned and subsumed by the molten interior. There are few terrestrial rocks from Hadean time, just a few mineral fragments found in sandstone substrates in Australia. However, study of lunar formations shows that the Earth/moon system continued to be bombarded by frequent asteroid collisions throughout the Hadean.

Between 4 billion and 2.5 billion years ago, the continental shield rock began to form. Approximately 70 percent of continental landmass was formed during this time. Small “island” land masses floated in the molten “seas.”  Earth had acquired enough mass to hold a reducing atmosphere composed of methane, ammonia and other gases. Water from comets and hydrated minerals condensed in the atmosphere and fell as torrential rain, cooling the planet and filling the first oceans with liquid water.

Exactly when or how it happened is unknown, but microfossils of this time indicate that life began in the oceans about 3.5 billion to 2.8 billion years ago. It is probable that these microscopic prokaryotes began as chemoautotrophs, anaerobic bacteria able to obtain carbon from carbon dioxide (CO2). By the end of the Archean, the ocean floor was covered in a living mat of bacterial life.

The Proterozoic Eon is also called the Cryptozoic ("age of hidden life"). About 2.5 billion years ago, enough shield rock had formed to start recognizable geologic processes such as plate tectonics. Geology was about to be joined by biology to continue Earth’s progress from a molten hell to a living planet. It is generally accepted that different types of prokaryotic organisms formed symbiotic relationships. Some types, more efficient at converting energy, were engulfed by larger protective “bubbles” able to shield them from the harsh environment. As time went on the symbiotic relationship became permanent and the “energy conversion” components became the chloroplasts and mitochondria of the first eukaryotic cells. Microfossils of these early cells are called Acritarchs.

After a brief ice age in the mid-Proterozoic, organisms underwent rapid differentiation. The Ediacaran Period , the last of the Proterozoic Era, saw the first multicellular organisms. Autotrophs and soft-bodied heterotrophs filled the continental shelf regions around Rodinia. Many were Cnidarians similar to small jellyfish with radial body symmetry and specialized cells to sting prey and convey it into the body cavity. Fossils show that significantly different populations inhabited different localities. Some benthic (sea bottom-dwelling) organisms used a muscular “foot” to cling to the ocean bottom similar to the modern sea pen. Kimbrella fossils show a clear anterior/posterior axis, bilateral body symmetry and some indications they could crawl. Some scientists classify them as being related to the mollusks.

The boundary between the Ediacaran Period of the Proterozoic Era and the Cambrian Period of the Paleozoic Era is not as clear-cut as it was once thought to be. It used to be thought that increasing oxygenation caused a mass extinction of Ediacaran forms and a geologically sudden proliferation of new complex forms. Now it is understood that there were many complex multicellular animals capable of living in the higher oxygen of the Ediacaran environment. However they were nearly all soft-bodied forms, which left few fossil traces behind for us to find. The relative abundance of Cambrian fossils represents an increase in animals with calcified body parts, which were easily fossilized, not a mass extinction of Ediacaran life as was once thought.