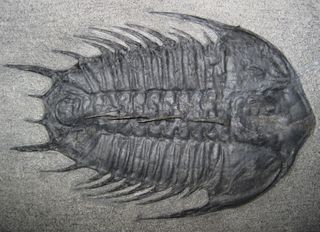 Trilobites were the dominant species during the Cambrian Period, 540 to 490 million years ago.
(Image: © Bill Frische | Shutterstock)

The Cambrian Period is the first geological time period of the Paleozoic Era (the “time of ancient life”). This period lasted about 53 million years and marked a dramatic burst of evolutionary changes in life on Earth, known as the "Cambrian Explosion." Among the animals that evolved during this period were the chordates — animals with a dorsal nerve cord; hard-bodied brachiopods, which resembled clams; and arthropods — ancestors of spiders, insects and crustaceans.

Though there is some scientific debate about what fossil strata should mark the beginning of the period, the International Geological Congress places the lower boundary of the period at 543 million years ago with the first appearance in the fossil record of worms that made horizontal burrows. The end of the Cambrian Period is marked by evidence in the fossil record of a mass extinction event about 490 million years ago. The Cambrian Period was followed by the Ordovician Period.

The period gets its name from Cambria, the Roman name for Wales, where Adam Sedgwick, one of the pioneers of geology, studied rock strata. Charles Darwin was one of his students. (Sedgwick, however, never accepted Darwin's theory of evolution and natural selection.)

Climate of the Cambrian Period

In the early Cambrian, Earth was generally cold but was gradually warming as the glaciers of the late Proterozoic Eon receded. Tectonic evidence suggests that the single supercontinent Rodinia broke apart and by the early to mid-Cambrian there were two continents. Gondwana, near the South Pole, was a supercontinent that later formed much of the land area of modern Africa, Australia, South America, Antarctica and parts of Asia. Laurentia, nearer the equator, was composed of landmasses that currently make up much of North America and part of Europe. Increased coastal area and flooding due to glacial retreat created more shallow sea environments.

At this point, no life yet existed on land; all life was aquatic. Very early in the Cambrian the sea floor was covered by a “mat” of microbial life above a thick layer of oxygen-free mud. The first multicellular life forms had evolved in the late Proterozoic to “graze” on the microbes. These multicellular organisms were the first to show evidence of a bilateral body plan. These near-microscopic “worms” began to burrow, mixing and oxygenating the mud of the ocean floor. During this time, dissolved oxygen was increasing in the water because of the presence of cyanobacteria. The first animals to develop calcium carbonate exoskeletons built coral reefs. [Image Gallery: Cambrian Creatures: Primitive Sea Life]

The middle of the Cambrian Period began with an extinction event. Many of the reef-building organisms died out, as well as the most primitive trilobites. One hypothesis suggests that this was due to a temporary depletion of oxygen caused by an upwelling of cooler water from deep ocean areas. This upwelling eventually resulted in a variety of marine environments ranging from the deep ocean to the shallow coastal zones. Scientists hypothesize that this increase in available ecological niches set the stage for the abrupt radiation in life forms commonly called the “Cambrian Explosion.”

Fossils of the Cambrian Period

Scientists find some of the best specimens for the “evolutionary experiments” of the Cambrian Period in the fossil beds of the Sirius Passet formation in Greenland; Chenjiang, China; and the Burgess Shale of British Columbia. These formations are remarkable because the conditions of fossilization led to impressions of both hard and soft body parts and the most complete records of the varieties of organisms alive in the Cambrian Period.

The Sirius Passet formation has fossils estimated to be from the early Cambrian Period. Arthropods are the most abundant, although the groups are not as diverse as those found in the later Burgess Shale formation.

The Sirius Passet has the first fossil indications of complex predator/prey relationships. For example, Halkieria were slug-shaped animals with shell caps at either end. The rest of the body was covered in smaller armor plates over a soft snail-like “foot.” It is unclear whether they are more closely related to the annelids, such as modern-day earthworms and leeches, or are a primitive mollusk. Some specimens have been found in curled up defensive postures like modern pill bugs. Predator/prey relationships provide intensive selection pressures that lead to rapid speciation and evolutionary change.

Burgess Shale fossils are from the late Cambrian. Diversity had increased dramatically. There are at least 12 species of trilobite in the Burgess Shale; whereas in the Sirius Passet, there are only two. It is clear that representatives of every animal phylum, excepting only the Bryozoa, existed by this time.

The largest predator was Anomalocaris, a free-swimming animal that undulated through the water by flexing its lobed body. It had true compound eyes and two claw-tipped appendages in front of its mouth. It was the largest most fearsome predator of the Cambrian Period, but did not survive into the Ordovician. The earliest known chordate animal, the Pikaia, was about 1.5 inches (4 centimeters) long. Pikaia had a nerve cord that was visible as a ridge starting behind its head and extending almost to the tip of the body. The fine detail preserved in the Burgess Shale clearly shows that Pikaia had the segmented muscle structure of later chordates and vertebrates. Haikouichythes, thought by some to be the earliest jawless fish, were also found in the Burgess Shale.

A mass extinction event closed the Cambrian Period. Early Ordovician sediments found in South America are of glacial origin. James F. Miller of Southwest Missouri State University suggests that glaciers and a colder climate may have been the cause of the mass extinction of the fauna that evolved in the warm Cambrian oceans. Glacial ice would have also locked up much of the free ocean water, reducing both the oxygen in the water and the area available for shallow water species.