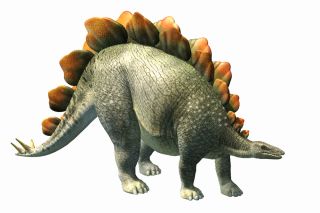 Stegosaurus was a large, plant-eating dinosaur that lived during the late Jurassic Period, about 150.8 million to 155.7 million years ago, primarily in western North America. It was about the size of a bus and carried around two rows of bony plates along its back that made it appear even bigger.

Stegosaurus is a bit of media darling because there is so much material to help scientists reconstruct its distinctive appearance. It has been depicted on television and in movies, most notably chasing Faye Wray in "King Kong" and appearing in the second and third installments of the "Jurassic Park" films. A newspaper cartoon even helped name one of its body parts.

Stegosaurus has a reputation for having a small brain and one of the lowest-brain-to-body ratios among dinosaurs. "The brain of Stegosaurus was long thought to be the size of a walnut," said armored dinosaur expert Kenneth Carpenter, director of the USU Eastern Prehistoric Museum in Utah. "But actually, its brain had the size and shape of a bent hotdog."

At one point scientists theorized that it had an auxiliary "brain" — not an actual brain but a bundle of nerves — above its rear legs to help control its movements because its brain was so small. This idea stemmed from the fact that the dinosaur had an enlarged canal in the pelvic region of its spinal cord, Carpenter said. However, that theory has since been rejected, and it is unclear what function this cavity served. It may have held a glycogen body, a structure found in birds that may play a role in energy storage, according to study published in the journal Paleobiology in 1990.

Stegosaurus was the largest and most well-known member of the Stegosauridae family of armored dinosaurs. The largest species was Stegosaurus armatus, a behemoth that grew up to about 30 feet (9 meters) long. It is considered a "type species," or the species that serves as the primary example of the Stegosaurus genus. However, Stegosaurus stenops — the best known and most studied Stegosaurus species due to its abundance of fossils, including a near-complete skeleton — may instead be more deserving of that title, Carpenter and paleontologist Peter Galton have argued in respective papers in the Swiss Journal of Geosciences in 2010.

There is also considerable debate regarding how many valid species of Stegosaurus exist, Carpenter told Live Science. On the one hand, there may be up to three or four species based on the differences seen in fossils. But if you're a "taxonomic clumper," you may think there's only a single species of Stegosaurus because a wide range of variation can exist within a single species (such as how all dog breeds belong to Canis lupus familiaris), Carpenter said.

Stegosaurus means "roofed lizard," which was derived from the belief by 19th-century paleontologists that the plates lay flat along its back like shingles on a roof. But most evidence supports the idea that the plates alternated in two rows, pointy side up from the dinosaur's neck down to its rear. Its 17 plates, called scutes, were made of a bony material called osteoderms but were not solid; they had lattice-like structures and blood vessels throughout.

Though it is uncertain what purpose the plates served, the blood vessels within the plates suggest temperature regulation (heat dissipation) was likely one function. However, that theory has been questioned — the microstructure of the plates suggests they weren't used to radiate heat, according to a 2005 analysis published in the journal Paleobiology. A more recent study, published 2010 in the Swiss Journal of Geosciences, concluded that the plates may have played a passive role in managing body temperature because of their large size and extensive blood vessels (similar to the way a toucan's large bill naturally radiates body heat), but that wasn't their primary function.

Experts think these spikes were used for defense against predators because of two lines of evidence. For one thing, about 10 percent of spikes found are damaged at the tip, Carpenter said. Additionally, scientists have found allosaur fossils (Stegosaurus's main predator) with puncture wounds from thagomizers.

Stegosaurus' long skull was pointed and narrow. It had an unusual head-down posture because it had forelimbs that were short in relation to its hind legs.

This leg-length imbalance suggests the dinosaur couldn't move very fast, because the stride of its back legs would have overtaken its front legs.

What did Stegosaurus eat?

Stegosaurus was an herbivore, as its toothless beak and small teeth were not designed to eat flesh and its jaw was not very flexible. Interestingly, unlike other herbivorous, beaked dinosaurs (including Triceratops and the duck-billed Hadrosaurids), Stegosaurus did not have strong jaws and grinding teeth. Instead, its jaws likely only allowed up and down movements, and its teeth were rounded and peglike. It also had cheeks, which gave it room to chew and store more food than many other of dinosaurs.

As a result of its short neck and small head, it most likely ate low-lying bushes and shrubs and other vegetation, including ferns, mosses, cycads, fruits, conifers, horsetails and even fallen fruit. Some scientists believe Stegosaurus could have stood on its hind legs to reach some taller plants, but this idea is debated.

In a 2010 study in the Swiss Journal of Geosciences, scientists modeled the teeth and jaws of Stegosaurus to better understand what the dinosaur was capable of eating.  The research showed that Stegosaurus had a very weak bite (weaker than a human bite) and could only break down twigs and branches less than half an inch in diameter.

The first Stegosaurus fossils were discovered in 1876 in Colorado by M.P. Felch and were named by Othniel C. Marsh in 1877.

Fossils from about 80 individuals were discovered in the Morrison Formation, which is centered in Wyoming and Colorado. Stegosaurus is even the state fossil of Colorado in tribute to the number of dinosaur skeletons found in the state. The formation also reaches into Montana, North Dakota, South Dakota, Nebraska, Kansas, Oklahoma, Texas, New Mexico, Arizona, Utah and Idaho.

And in 2007, researchers discovered a Stegosaurus fossil in Portugal. The finding, which was published in the German science journal Naturwissenchaften, shows that the dinosaur lived in Europe in addition to North America, and supports the idea that the two continents were once connected by temporary land bridges that surfaced during low tide.