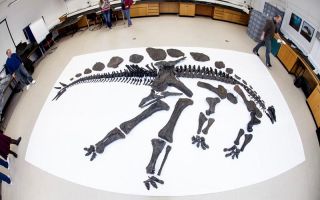 A rare skeleton of a nearly 10-foot-tall (3 meters), 150-million-year-old Stegosaurus will be unveiled at the Natural History Museum in London next month. The skeleton is the museum's first complete dinosaur to go on display in almost 100 years, and is the only Stegosaurus skeleton in a public collection outside the United States.

The dinosaur (Stegosaurus stenops) was an herbivore that lived about 155 million to 150 million years ago, during the late Jurassic Period. Stegosaurus, known for the two rows of bony plates along its back, primarily lived in western North America.

The new specimen also hailed from the American West. Bob Simon, president of Virginia Dinosaur Company and Dinosaur Safaris, a private corporation that excavates and preserves Jurassic dinosaur bones, discovered the Stegosaurus in spring 2003 at the Red Canyon Ranch in Wyoming. The skeleton was almost fully connected — it was missing only the left arm and base of its tail — and took three weeks to excavate. [See stunning photos of the Stegosaurus skeleton]

"It's an honor to have this extraordinary specimen permanently on display to inspire Natural History Museum visitors," Barrett said in a statement. "Stegosaurus fossil finds are rare. Having the world's most complete example here for research means we can begin to uncover the secrets behind the evolution and behavior of this intriguing dinosaur species."

The Stegosaurus was a young adult when it died, but it's unclear whether it was male or female, researchers said. Measurements show that its skeleton, containing more than 300 bones, is 18.3 feet long (5.6 m), comparable in size to a 4x4 truck.

The specimen includes 19 plates on its back and four spikes on its tail, making it the most complete stegosaurus plate set ever found, researchers said. Moreover, the skull bones aren't squashed, but three-dimensional and detached from one another, making it easy for scientists to study the dinosaur's eating habits and bite strength.

Since the Stegosaurus arrived at the museum in December 2013, researchers have been busy taking measurements, photographs, laser surface scans and CT scans of the skeleton to learn more about its anatomy.

The Natural History Museum, which holds 8 million fossils, is known for the 85.3-foot-tall (26 m) cast of a Diplodocus — a long-necked, long-tailed dinosaur that roamed western North America in the Jurassic Period — stationed near the entryway, but the new dinosaur will likely draw larger crowds.

"It inspires genuine wonder when you see it, but unlike our much-loved Diplodocus cast, this is the real thing," said Sir Michael Dixon, director of the museum. "We hope that this amazing specimen will inspire a new generation of young visitors to learn more about the natural world and our place within it."