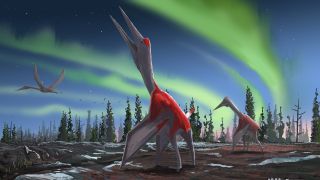 Millions of years ago, a flying reptile as big as an airplane took flight in what is now Canada.

Now, this enormous species of giant pterosaur — part of a group known as azhdarchids — finally has a name: Cryodrakon boreas, drawing from the ancient Greek words that translate to "cold dragon of the north winds."

Fossils of Cryodrakon boreas were found decades ago, and were thought to belong to another North American azhdarchid: Quetzalcoatlus, one of the biggest flying animals of all time. But the discovery of additional fossils in recent years told scientists that the fossils represented a newfound species, and the first new species of giant pterosaur found in Canada.

Based on the size of one enormous neck bone thought to belong to an adult animal, the newly described pterosaur likely had a wingspan extending about 33 feet (10 meters) from tip to tip, making it comparable in size to its monstrous azhdarchid cousin Quetzalcoatlus, researchers reported in a new study.

Related: Photos of Pterosaurs: Flight in the Age of Dinosaurs

Azhdarchids lived on all continents except Antarctica and Australia, and are known for having supersize heads, long necks, long legs and large feet, said lead study author David Hone, a senior lecturer and director of the biology program at Queen Mary University in London. But despite this group's massive size, very few fossils of the flying giants remain, Hone told Live Science in an email.

Fossils are typically preserved when animal remains are buried in layers of sediment and locked away from bacteria that break down organic matter. Many of the best-preserved remains from millions of years ago belonged to animals that lived near seas or rivers, and pterosaurs at this time (including Cryodrakon) mostly lived inland, Hone explained.

"And their bones are insanely thin, so they are very rare," he added. "We're lucky we have as much good material as we do."

What might C. boreas have looked like in life? Paleoartist David Maas illustrated the pterosaur with a distinctive pattern of red and white that will likely be immediately recognizable to any Canadian. Viewed from above with its wings at full spread, the markings across Cryodrakon's back and wingtips strongly resemble the Canadian flag, down to the iconic maple leaf in the center.

This was a "fun" artistic choice, as there's no fossilized evidence of the animal's colors or patterns, Hone told Live Science in the email. Nevertheless, "it's actually a plausible colour scheme," he added.

"It's nothing ridiculous or impossible based on what we know about the colours of large living birds," Hone said.

The findings were published online Sept. 9 in the Journal of Vertebrate Paleontology.