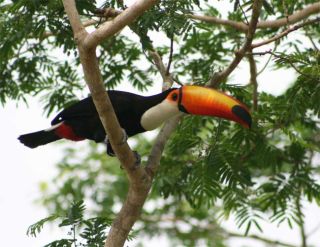 Adult toco toucans (like this one in the Pantanal) sport bills that are about one-third of their body length.
(Image: © Thiago Filadelpho.)

Some animals sweat to cool off. Toucans can't. Instead, they use their enormous orange bills as radiators to dump heat and stay chilled.

The toco toucan (Ramphastos toco), which hangs out in the canopies of tropical rainforests in South America, sports the largest bill relative to body size of any bird, making up about one-third of the toucan's body length of about 25 inches (64 cm).

Researchers have puzzled for centuries over the bill's possible purpose, suggesting it might be used to attract mates or to snag fruit. The new study doesn't solve the case of the enormous bill, but the results suggest one possible function — to regulate body temperature.

"All endotherms (mammals and birds) try to regulate their body temperature to be fairly constant," said study team member Denis Andrade of São Paulo State University in Brazil. "For that purpose, we continuously balance the amount of heat we produce with the heat we exchange with the environment."

Other animals found to wear their own heat exchangers include elephants, whose ears help them maintain a constant body temperature, and ducks, whose bills work in a similar heat-emitting manner. But the toco toucan, it seems, takes it to the extreme, as this bird can get rid of a maximum of four times the amount of heat the bird produces at rest.

The new finding makes sense, as this animal appendage has all the right stuff for a thermal regulator, the researchers note in the July 24 issue of the journal Science. The toucan bill is giant, meaning it has a large surface area over which to radiate heat; it's not insulated with feathers or other heat-trapping material; and it is equipped with a network of blood vessels for dumping or absorbing heat.

Andrade and his team used video cameras with heat-sensing technology to record the bill and body temperatures of toco toucans in the lab.

Each bird was placed inside a chamber, where the temperature was either raised or lowered in 2-degree increments down to about 45 degrees Fahrenheit (8 degrees Celsius) or up to 97 degrees F (36 degrees C).

As the surrounding temperature heated up, so did the birds' bills. Since the birds' core body temperature remained relatively constant, the scientists figured the birds were somehow drawing heat through their bills. For example, at temperatures below about 80 degrees F (25 degrees C), the area of the bill closest to the bird's face heated up while the bill tip did not. Above that temperature, the entire bill warmed.

The reverse was also true, as temperatures dipped so did the bird's bill.

Here's how it works …

Andrade compares the bird's bill to windows in a house.

"If [the house] has a window you can open it up during the summer and keep it closed during the winter,” Andrade told LiveScience.

The results showed that when balmy, the toucans increased blood flow to a small part of their bills, just "cracking the window," while sweltering temperatures yanked the windows wide open as blood flow increased across the entire bill.

The toucans could also conserve heat, essentially shutting their windows, by stemming blood flow to the bill.