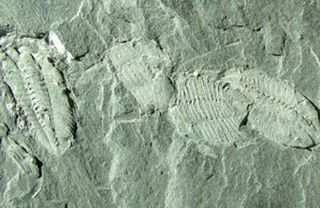 Seeking safety in numbers is an age-old maneuver—at least 465 million years old, it turns out. Ordovician-period fossils discovered in Portugal show groups of trilobites hiding out or molting together—rare clues to the ancient marine arthropods’ social and survival behaviors.

The fossils come from a roofing-slate quarry near the town of Oporto. Small trilobites often appear together in single files that zigzag or wave their way across the rock. It’s as if predator-wary trilobites sought shelter in long, narrow tunnels, say Juan C. Gutiérrez-Marco of the Institute of Economic Geology in Madrid and his colleagues, who analyzed the fossils.

Other clusters are made up of hundreds of exuviae, the exoskeletons discarded by molting trilobites. The exuviae point every which way, a clue that a trilobite assembly, and not a water current, deposited them. Mass molting—followed by mass mating—is something trilobites’ relatives the horseshoe crabs still do today. The new find joins other fossil groupings that indicate trilobites probably followed the same molt-mate pattern—mass actions being a good way for any one tender-shelled animal to protect itself and its spawn from being eaten.

Gutiérrez-Marco’s team also reports the presence of giant specimens in the Portuguese trove, including an incomplete one that they estimate was three feet long in life. If so, it would be the largest trilobite ever found. Bigness may have been an adaptation to cold water: back then, Portugal lay near the South Pole. (Geology)

This article was provided to Live Science by Natural History Magazine.