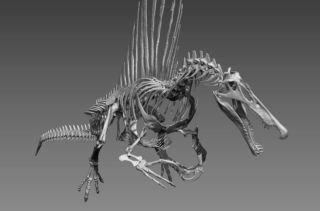 Based on the skeleton (reconstruction, shown here), researchers think Spinosaurus aegyptiacus would have sliced through the water in a river system in what is now Africa, snatching fish in its cone-shaped interlocking teeth.
(Image: © University of Chicago, Fossil Lab (Screengrab))

The fearsome Spinosaurus is one of the icons of the dinosaur pantheon. It was larger than T. rex (and larger than all other carnivorous dinosaurs, in fact), and on its back it sported a sail taller than an adult man.

Now, researchers have discovered something even more astonishing about this ancient beast. Spinosaurus was the only known dinosaur adapted to living almost entirely in the water.

Around 97 million years ago, in a river system in what is now Africa, the enormous Spinosaurus aegyptiacus sliced through the water, snaring fish in its cone-shaped, interlocking teeth, researchers report today (Sept. 11) in the journal Science. New fossils reveal that the 50-foot-long (15 meters) dinosaur had a host of adaptations for an aquatic lifestyle, including flat, possibly webbed feet and nostrils high up on its head.

"The animal we are resurrecting is so bizarre that it is going to force dinosaur experts to rethink many things they thought they knew about dinosaurs," said Nizar Ibrahim, a vertebrate paleontologist at the University of Chicago who led the new study of Spinosaurus. [See Images of the Bones and Reconstructed Spinosaurus]

The tale of how this sail-backed beast came to be recognized as the first-known semi-aquatic dinosaur spans more than a century and involves the tragedy of war as well as incredible good luck.

Spinosauruswas first described in 1915 by a German paleontologist named Ernst Stromer, who found some of the animal's bones — including backbones with spines up to 7 feet (2.1 m) tall — in Egypt. Stromer produced detailed illustrations and descriptions of his discovery, but in April 1944, his entire collection, including Spinosaurus, was destroyed in an Allied Royal Air Force bombing of Munich.

Other people found fragments ofSpinosaurus bones after Stromer's collection was destroyed, but none were as complete as the skeleton lost to Allied bombs. That is, until April 2008.

In that month, Ibrahim and his colleagues were returning from fieldwork in the Kem Kem Beds of Morocco when they stopped in a desert town where locals often brought them fossils to identify. A local fossil hunter approached with a cardboard box fill of sediment and several bones. [Photos: One of the World's Biggest Dinosaurs Discovered]

One bone caught Ibrahim's eye. It was long and blade-shaped, perhaps a rib, but with an odd red line running through its cross section.

"I thought, 'Maybe this is a rib, but maybe, just maybe, this is a spine of Spinosaurus,'" Ibrahim told reporters during a teleconference this week. He arranged to have the bones kept in the university collection in Casablanca, hoping he'd one day be able to identify them.

Not long after, Ibrahim was visiting the Museo Civico di Storia Naturale di Milano when paleontologists there showed him some commercially acquired bones they believed to be from Spinosaurus. There, on one of the spines, was the same red line Ibrahim had seen in a cardboard box in Morocco.

Unfortunately, the bones had been taken out of context, and the researchers in Milan couldn't say where they were found. The moment launched what Ibrahim called "Mission Impossible." He had to go back to Morocco, find the man with the cardboard box and learn where the Spinosaurus bones had come from.

One problem: The only thing Ibrahim knew about the man with the cardboard box was that he had a mustache. Still, he and his colleagues returned to the village and asked around, to no avail. Near the end of the failed mission, Ibrahim sat in a cafe drinking mint tea and envisioning his dreams going down the drain. At that moment, in a twist worthy of a Hollywood blockbuster, the mustached man walked by his table.

With a guide to lead them to the Spinosaurus site, the researchers discovered even more bones, all from the same individual dinosaur. They soon realized that these bones were very strange indeed. They were very dense, without the hollow medullary cavity found at the center of the long bones of the arms and legs in most animals. Dense bones like these are found in marine animals and function as a sort of buoyancy control.

The research team combined the new bones with Stromer's drawings and other Spinosaurus bones from a half dozen museums worldwide to create a digital model of the animal's skeleton. Evidence from the skeleton pointed to a watery lifestyle: the interlocking, crocodilelike teeth, ideal for catching swimming prey; the nostrils in the middle of the snout, high on the head; the flexible, rudderlike tail and small hind limbs, common in aquatic animals; and the flat, paddlelike feet, which Ibrahim and his colleagues suspect may have been webbed. The dinosaur even had a network of holes and channels, called foramina, in its snout, identical to structures that modern-day crocodiles use to detect pressure changes in the water made by swimming prey. [Paleo-Art: Stunning Dinosaur Illustrations]

What's more, when researchers analyzed the skeleton, they found that Spinosaurus aegyptiacus had a center of mass far forward on its body, which would have suited it very well in the water. On land, however, the dinosaur would have had to use its front limbs to balance rather than striding around on its hind limbs like a T. rex.

"You would not want to meet this animal on land, but it was not gallivanting across the landscape," said study researcher Paul Sereno, a vertebrate paleontologist at the University of Chicago.

Other Spinosaurus species ate fish, Sereno said, but Spinosaurus aegyptiacus is apparently the only one that took the lifestyle to the next level, spending most of its time in the water.

Questions remain about the species, however. Spinosaurus' enormous sail remains something of a mystery, though the researchers suspect it was used as a display structure and was probably often visible as the animal swam. The researchers are also very interested in learning more about how Spinosaurus moved through the water. Sereno said it most likely propelled itself with both legs and tail.

"It's a chimera. It's half-duck, half-crocodile," Sereno said. "We don't have anything alive that looks like this animal."