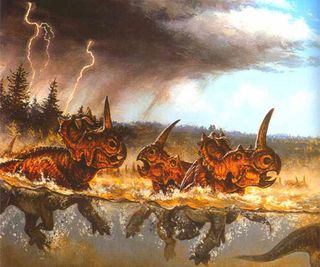 A herd of centrosaurs (a type of horned dinosaur) swimming in a flood millions of years ago in what is now Alberta, as depicted in this illustration.
(Image: © Royal Tyrrell Museum)

Whether a team of dinosaurs could win an Olympic relay race is up for debate. But they wouldn't be afraid to jump in the water.

All dinosaurs could swim, said Dave Gillette, curator of paleontology at the Museum of Northern Arizona in Flagstaff.

"They might not have been graceful, but they could swim nevertheless. Think of elephants, or horses they swim quite well even though their bodies do not look like the bodies of swimmers at all."

Dinosaurs were motivated to swim by the same instincts that send a beaver or a duck to take a dip.

"They might swim to find food in water, to hide from predators, to cool off, to go from one bank or another, or even to swim across a river or a bay to a barrier island, and all the other reasons that an animal would decide to swim," Gillette said.

Like all reptiles, dinosaurs breathed air and had to take regular breaths, whether they were in or out of the water.

"Dinosaurs were surely just as adept at swimming, and just as talented at taking in sufficient air to continue breathing," Gillette said. "This all means that they had to be buoyant, too, so they could stay close to the surface of the water, rather than sinking and drowning."

Although most dinosaurs spent a majority of their time roaming the land, some dinosaurs, such as Spinosaurus and Baryonyx, were likely amphibious. Both of these species were as large as Tyrannosaurus rex and had an anatomy similar to that of crocodiles . They also had huge skeletal spines on their backbone that looked like a sail, but Gillette said those spines were covered with muscle and tendons and skin, and could not have functioned as an actual wind-catching sail.

Other than skeletons of swimmers, scientists have also discovered tracks of wading dinosaurs.

"Some trackways indicate that dinosaurs 'poled' their way around in shallow water, like a boatman use a pole to push a boat," said Gillette. "Or, like the way humans push off and glide, then sink a little and then push off again, and glide..."

For example, in 2007 paleontologists from the University of Nantes in France came across S-shaped prints on the bottom of what was once a lake in the Cameros Basin in Spain. The unusual tracks suggest the animal's body was supported by water when it scratched the lakebed.

In 2005 in Wyoming, Debra Mickelson from the University of Colorado at Boulder discovered dinosaur tracks in what was an ancient sea floor. The footprints were left behind 165 million years ago by an ostrich-sized dinosaur .

"The swimming dinosaur had four limbs and it walked on its hind legs, which each had three toes," Mickelson said. "The tracks show how it became more buoyant as it waded into deeper water the full footprints gradually become half-footprints and then only claw marks."

Dinosaurs weren't the only creatures showing off their swim strokes during the Mesozoic period. Many reptiles living during the same time as dinosaurs were restricted to living in the sea.

"Plesiosaurs, mosasaurs and sea turtles are all non-dinosaurian reptiles that lived the sea in the Mesozoic and perhaps only came to land to lay eggs," Gillette said.