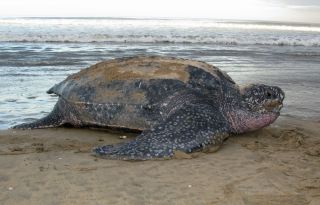 Turtles all have shells, some just have them inside their skin, like this Eastern Pacific leatherback turtle.
(Image: © George L. Shillinger)

While most turtles sport a hard, protective shell on their backs, leatherback sea turtles have their bony protection embedded under their skin and oily flesh. Hence the name…

Most turtle shells are made of scutes, or hard, bony plates outside the turtle's skin, but the leatherback has mini-plates underneath its thick, leathery skin. It also have seven ridges that run along its back, underneath the skin.

These large sea turtles recently charted one of the longest migrations of any vertebrate animal, and can be found in every ocean of the world.