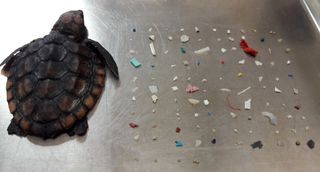 A photo of a baby loggerhead sea turtle that died after eating 104 pieces of plastic went viral on Facebook this week. The photo was posted by the Gumbo Limbo Nature Center in Boca Raton, Florida, on Tuesday (Oct. 1) and shows the lifeless turtle, no bigger than the palm of your hand, next to the dozens of small pieces of plastic found in the animal's digestive tract, neatly organized in rows.

The little turtle found a wide variety of plastic to chow down on. "We found a piece of a balloon. There was a wrapper that goes on the outside of bottles," Whitney Crowder, the sea turtle rehabilitation coordinator at the Gumbo Limbo Nature Center, told the South Florida Sun Sentinel.

This poor hatchling was a "washback" turtle — a baby that swam a few miles out to sea, where it started eating, but washed back to shore after a few weeks. Washbacks this size are around 1 to 2 months old, said Leanne Welch, manager of the Gumbo Limbo Nature Center, which has been rescuing and rehabilitating sea turtles and providing marine science education programs for more than 30 years.

"It's washback season at Gumbo Limbo and weak, tiny turtles are washing up along the coastline needing our help," Gumbo Limbo Nature Center staff wrote in the Facebook post. "Unfortunately, not every washback survives. 100% of our washbacks that didn't make it had plastic in their intestinal tracts." The plastic clogs up the animal's digestive tract, they wrote.

"Unfortunately, it's not unique," Welch told Live Science. "I was just down there, and they're necropsying another washback with plastic in it. It's something we see every day."

Florida beaches serve as nesting grounds for five species of sea turtle: the loggerhead (Caretta caretta), green (Chelonia mydas), leatherback (Dermochelys coriacea), Kemp's ridley (Lepidochelys kempii) and hawksbill (Eretmochelys imbricata), according to the Florida Fish and Wildlife Conservation Commission. All of these species are considered endangered or threatened under the Endangered Species Act. The loggerhead is the most common species found nesting in the Boca Raton area of South Florida.

Once a female loggerhead lays her nest, the eggs incubate in the sand for about 60 days until hatchlings emerge and make a desperate sprint across the beach to their ocean home. They hit the water and immediately swim several miles offshore to floating mats of seaweed known as sargassum, Welch said.

Defenseless baby turtles find food and shelter in the seaweed for the first few years of their lives. And unfortunately, in addition to the small shrimp and other crustaceans the turtles find to eat in the sargassum, they find a wealth of bite-size pieces of plastic to feast on, Welch said.

"Many of these young turtles are dying from plastic impaction. The plastic plugs them up and causes them to go into septic shock," center staff wrote in response to a comment on the Facebook post. "Plastic pollution is the sad world we live in now. We need to do better."