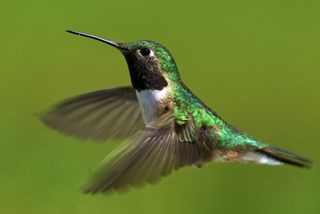 The world's most diminutive dinosaur is … a hummingbird!

"Birds are just one lineage of dinosaurs that happened to survive to the present," said Julia Clarke, a paleontologist at North Carolina State University and the North Carolina Museum of Natural Sciences.

As for the record-holder of the world’s smallest extinct dino, Clarke says there are a few candidates.

At 15-inches-long and weighing fewer than 6 ounces, the slender runner, Parvicursor, takes the cake as the smallest non-avian, extinct dinosaur.

In Argentina, scientists made a big mistake naming Mussaurus or "mouse lizard," for its small size. Later digs unveiled giant versions of this dinosaur! Scientists soon realized that they had first discovered fossils of a baby Mussaurus, but that the adults could weigh up to 250 pounds.