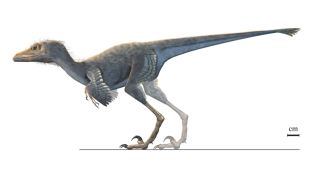 Remains of a petite dinosaur reveal that some of the ancestors of birds had already shrunk in size before flight evolved.

The dinosaur, a mere 2 feet long (70 centimeters) and weighing the equivalent of two cans of soda, roamed the Earth 80 million years ago during the Cretaceous period (between 146 and 65 million years ago). "This specimen shows that dinosaurs evolved small size earlier than we previously thought," said study team member Julia Clarke, a paleontologist at North Carolina State University and the North Carolina Museum of Natural Sciences.

A prerequisite for flight is the ability to lift one's body off the ground. So for dinosaurs to take to the skies, they first had to "lose some weight." But did already-small dinosaurs shrink further in size after they took to the air and became birds? Or did they first shrink in size before they could fly?

Paleontologists had previously assumed it was the first scenario that occurred, but the new finding, detailed in the Sept. 7 issue of the journal Science, suggests otherwise.

"Paleontologists have long thought that miniaturization occurred in the earliest birds, which then facilitated the origin of flight," said lead author Alan Turner, a graduate student at the American Museum of Natural History and Columbia University in New York. "Now, the evidence shows that this decrease in body size occurred well before the origin of birds and that the dinosaurian ancestors of birds were, in a sense, pre-adapted for flight."

The tiny tot, dubbed Mahakala omnogovae, was unearthed in the southern Gobi Desert region in Mongolia. Turner and his colleagues analyzed the fossilized bones, including portions of its skull, forelimb, hindlimb and much of the vertebral column.

By comparing Mahakala with other small meat-eating dinosaurs, and birds, the paleontologists showed small size was a common feature within the two dinosaur lineages most closely related to birds, dromaeosaurids and troodontids.

Specifically, they placed the new species at the base of the dromaeosaurids, a group of fierce predators equipped with switchblade-like talons, with the most famous member being "Jurassic Park" star Velociraptor.

However, the dinosaurs within these lineages didn't step down in size uniformly over time and, in fact, some of the dinosaurs' sizes ballooned by nearly three orders of magnitude.

"In this case, gigantism is kind of relative. These animals aren't reaching the size of T. rex or anything," Turner told LiveScience.

If size-shrinking of dinosaurs occurred well before the origin of flight, then paleontologists will have to revisit traditional beliefs about the evolution of modern-day birds.

"We had closely linked smaller size in dinosaurs, including birds, to flight, changes in growth strategy and metabolism: They got progressively smaller, grew faster and flew," Clarke said.

The new findings reveal small size occurred evolutionarily before other flight innovations. "It forces us to look at the ways we were explaining trends within this part of Dinosauria and to question our previous assumptions about causal factors in, and timing of, the acquisition of attributes seen in living birds," Clarke explained.