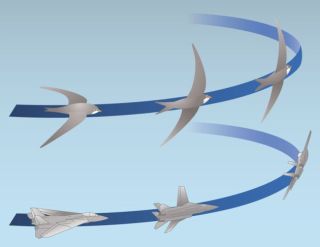 Like a swept-wing fighter jet, some birds can turn on a dime by adjusting the angle of their wings to create tiny tornadoes that draw them up, according to a new study that solves a longstanding mystery.

The special avian design creates a miniature vortex atop the wing, researchers said Thursday. Low pressure inside the vortex, just as in the center of a tornado, sucks the wing up.

Ironically, aerospace engineers figured out how to take advantage of these vortices long before scientists showed that birds use them. The U.S. military's F-14 Tomcat and the Concorde passenger jet both employed a similar design, in which vortices allow the supersonic jets with tiny, swept-back wings slow down for landing without falling out of the sky.

Scientists have known since 1996 that insects use these vortices, too. But the intricacies of avian flight are nearly impossible to observe.

The new study involved a bird called the swift. Scientists made models of the swift's wings and tested them in a water tunnel which, like a wind tunnel, allows detailed mapping of fluid flow.

With both the swift and the F-14, wings are swept back for high-speed flight, then the sweep is reduced to create uplifting vortices during tight turns.

In the case of the swift, the phenomenon allows for precision aerobatics needed to snatch insects out of the sky. And it likely explains how nearly all birds land.

"To land on a branch it is necessary to slow down without losing altitude," explained study leader John Videler of the Leiden and Groningen universities in The Netherlands. "This cannot be done with a conventional wing -- it loses lift with decreasing speed."

A vortex like those mapped in the water tunnel can create both high lift and high drag at any speed, Videler told LiveScience. "The drag slows the bird down and the lift keeps it at the right altitude to make it to the branch."

The study is detailed in the Dec. 10 issue of the journal Science.

Avian wings, unlike those of fighter jets and insects, are built of two distinct parts. Nearest the body is the arm-wing. It generates lift in conventional manner, like a standard airplane wing. "Air flows around the wing and the shape of the wing deflects the air downward," Videler said.

The outer wing is called the hand-wing. It has a sharp leading edge that can create the tiny tornadoes even at a small angle of attack, the study found. While the wings of an insect typically must be at more than a 25-degree angle to the oncoming air to generate a vortex, the swift's hand-wing needs just a 5- to 10-degree angle of attack.

Wings of most other birds, except albatrosses and giant petrels, are constructed similarly, so the findings likely apply to them, too, Videler said.

"The current understanding of how birds fly must be revised," Videler and his colleagues conclude.

As is often the case, Nature is ahead of the engineers. And Videler and his colleagues have only scratched the surface of how a swift employs mini-tornadoes toward such agile flight.

In an analysis of the discovery, Ulrike Muller and David Lentink of Wageningen University in The Netherlands say the next challenge is to figure out exactly how the swift uses its variable wing sweep to increase flight performance.

"In the future," Muller and Lentink write in the journal, "the swift's flight control might inspire a new generation of engineers to develop morphing microrobotic vehicles that can fly with the agility, efficiency, and short take-off and landing capabilities of insects and birds."