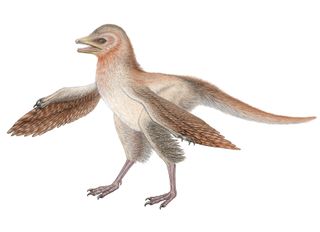 Researchers have discovered a new species of feathered but flightless little dinosaur from the Jurassic period.

Remains of the tiny beast, dubbed Eosinopteryx brevipenna, found in northeastern China suggest it was slightly less than a foot long (30 centimeters) and had a short snout and a short tail. Based on the dinosaur's small wingspan and bone structure, researchers believe it would have been able to run around quite easily, but likely couldn't whip up enough of a wing-beat to fly. The dinosaur also sported toes that would have been suitable for walking along the ground, the researchers added.

This birdlike dinosaur's plumage was much more reduced compared with the feathers on some of its contemporaries, which suggests that feathering was already diversified by the Late Jurassic, adapted to different ecological niches and purposes, the researchers said. (The Jurassic period lasted from about 199.6 million to 145.5 million years ago.)

"This discovery sheds further doubt on the theory that the famous fossil Archaeopteryx — or 'first bird' as it is sometimes referred to — was pivotal in the evolution of modern birds," researcher Gareth Dyke, a senior lecturer in paleontology at the U.K.'s University of Southampton, said in a statement.

"Our findings suggest that the origin of flight was much more complex than previously thought."

Archaeopteryx was long thought by many to have been the earliest bird. Discovered in 1860 in Germany, it is sometimes referred to as Urvogel, the German word for "original bird" or "first bird." But recent findings suggest late-stage Jurassic Archaeopteryx was actually just a relative of the lineage that ultimately gave rise to birds.

The new research was detailed in the Jan. 22 issue of the journal Nature Communications.