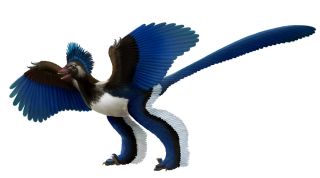 The legendary winged creature long known as the earliest bird, Archaeopteryx, might have just been dethroned, scientists reveal.

Instead, a newfound fossil from China suggests Archaeopteryx was not a bird after all, but one of many birdlike dinosaurs, a finding that could force scientists to rethink much of what they thought they knew about the origin and evolution of birds.

Archaeopteryx lived about 150 million years ago in what is now Bavaria in Germany, back when Europe was an archipelago of islands in a warm shallow tropical sea. First discovered 150 years ago, the carnivorous fossil, with its blend of avian and reptilian features, seemed an iconic evolutionary link between dinosaurs and birds, bolstering Darwin's theory of evolution published just two years before the fossil discovery. Its place as the earliest and most primitive known bird made it central to the scientific understanding of the evolution of birds and flight. [Image Gallery: Darwin in Display]

Still, for decades, there have been doubts as to whether Archaeopteryx was really a bird.

"What's happened over the past 15 or 20 years is that so many of the seemingly uniquely birdlike characteristicsof Archaeopteryx, such as feathers, a wishbone and a three-fingered hand, became a lot less unique," anatomist and paleontologist Lawrence Witmer at Ohio University told LiveScience. "We've started finding a lot of dinosaurs with feathers, and lots and lots have a wishbone, even T. rex, for this progressive erosion of the avian status of Archaeopteryx."

Now scientists have uncovered a new fossil in China whose combination of features unexpectedly suggests Archaeopteryx was actually just a relative of the lineage that ultimately gave rise to birds.

The novel chicken-size fossil in question, Xiaotingia zhengi, dates back about 155 million years. The carnivore was found in Liaoning in China, where many other extraordinary specimens of feathered dinosaurs and early birds have been unearthed. (The species is named after Zheng Xiaoting, who helped establish the Shandong Tianyu Museum of Nature as a repository for vertebrate fossils from China.)

To see where X. zhengi belonged evolutionarily, paleontologist Xing Xu at the Chinese Academy of Sciences in Beijing and his colleagues tallied up all of its birdlike and dinosaurlike features, such as long robust forearms, and compared them with other species. These species included avialans, a group containing ancestors of modern birds, and deinonychosaurs, close relatives of avialans, which together are known as paravians. Avialans include dinosaurlike birds, while deinonychosaurs include birdlike dinosaurs — a blurry distinction that has led scientists to often bounce species around between the groups.

When the researchers analyzed features of Xiaotingia and Archaeopteryx, the resulting family tree clustered them together. Unexpectedly, it also yanked them out of the avialan category and placed the duo with the deinonychosaurs.

New bird on the block

"This has a huge impact about how we view the early evolution of birds," said Witmer, who did not take part in this study. "For 150 years, scientists have tended to view their early evolution through the lens of Archaeopteryx, and how much of what they thought now needs to be re-examined?"

"As we try to tease apart what's going on, we're left with slight differences between species, and each new find reshuffles the deck — Xiaotingia might have moved Archaeopteryx out of the birds, but the next find could move it back into birds or somewhere else," Witmer said. "That's how it should be, how science works — new evidence changes our conclusions."

Xing and his colleagues detailed their findings in the July 28 issue of the journal Nature, and Witmer wrote an accompanying commentary.