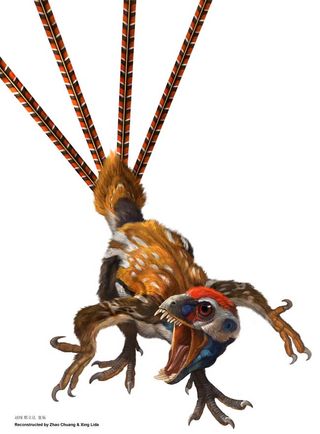 Epidexipteryx, a new feathered dinosaur from the Jurassic Period, likely used its long tail feathers for display and possibly to help with balance while creeping along tree branches.
(Image: © Zhao Chuang & Xing Lida.)

That picture comes from a fossil of a nearly complete skeleton and the well-preserved feathers of Epidexipteryx hui, discovered in Inner Mongolia, China. The finding, detailed in the Oct. 23 issue of the journal Nature, fills in gaps about the transition from non-avian dinosaurs to birds.

Although scientists are not positive about the dates for the sediments that the skeleton was found in, researchers suspect the dinosaur lived some time around 152 million to 168 million years ago during the Middle to Late Jurassic Period. That makes the remains slightly older than Archaeopteryx, long considered the oldest bird, which lived about 150 million years ago.

"Although this dinosaur cannot be the direct ancestor for birds, it is one of the dinosaurs that have the closest phylogenetic relationship to birds," said researcher Zhonghe Zhou of the Institute of Vertebrate Paleontology and Paleoanthropology at the Chinese Academy of Sciences in Beijing. "Therefore, it could provide a lot of information about the transition process from dinos to birds," including changes in the tail and feathers.

He added, "This find confirms the link between dinosaurs and birds, and indicates that we are getting closer and closer to the details of the transition from dinos to birds."

Weighing in at nearly 6 ounces (164 grams), Epidexipteryx likely stayed grounded. Its feathers were not flight-ready like those seen in other bird-like dinosaurs such as Microraptor, which sported two sets of wings similar to early biplanes.

"At the time when this dinosaur was living, volcanic eruptions were very frequent," Zhou told LiveScience. "It lived in a continental environment with lakes and trees. Together with this dinosaur, the biota also included a lot of insects, plants, salamanders, lizards, haired pterosaurs, primitive swimming and flying mammals."

The dinosaur's tail feathers are odd compared to those of modern birds and even other feathered dinosaurs in which a central shaft runs down the middle of the feather with veins branching out from either side. "These seem to lack that main shaft down the middle and are just a really long collection of very long, filamentous-like structures," said Mark Norell, a paleontologist at the American Museum of Natural History in New York.

He added, "Things more primitive than this [dinosaur] have fully formed feathers.  This is just some weirdo kind of thing this animal has."

As scientists and others discover more and more dinosaur fossils with bird-like features, the picture of such creatures is becoming more complex, said Norell, who was not involved in the current study.

"Just like the bird diversity we have living today goes all the way from hummingbirds to ostriches to toucans, it's incredibly diverse," Norell said during a telephone interview. "Now we're starting to see that sort of diversity extends not only in birds but also in the close bird relatives [which] were just as physically diverse as modern birds are."