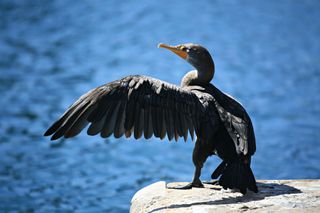 Birds have three digits (like fingers) in their wings. New research helps explain how those digits shifted somewhere between modern birds and their dinosaur ancestors.
(Image: © Dreamstime)

Birds are believed to be descended from dinosaurs, but some significant changes must have happened as they evolved from their ancestors. A new study involving baby chicks may help clear up a mystery of how one of those changes occurred -- how birds got their wing "fingers."

All four-limbed creatures, including dinosaurs, evolved from an ancestor that had five digits at the end of its limbs. These became flippers, wings, hands or paws, and some or all of the digits disappeared altogether in some cases.

Scientists think birds evolved from a group of meat-eating dinosaurs called maniraptors some 150 million years ago, during the Jurassic period. Modern birds have three digits in each of their wings, which means two digits in the forelimbs of these dinosaurs would have had to be lost during evolution.

A question of numbering

But which three digits survived? Paleontologists and developmental biologists have disagreed heartily on this. A proposal made in 1999, called the “frame shift” hypothesis, explained a discrepancy in the evidence, but not everyone accepted it.

The new study, conducted by researchers who transplanted cells from one part of a chick’s body to another, adds to the support for the hypothesis. The results of their study appear today (Feb. 10) in the journal Science.

If you number the digits so that digit 1 corresponds with our thumbs, digit 2 with our index fingers and so on, the fossil record shows that birds' wings evolved using digits 1, 2 and 3 of the dinosaur’s forelimbs.

However, in a bird embryo, the digits arise from the places on the limb bud associated with digits 2, 3 and 4. This conflict supported those who challenged whether birds were directly descended from dinosaurs.

In 1999, Günter Wagner and Jacques Gauthier of Yale University bridged the two factions by proposing that during development, digit 1 actually arose from the second position (where digit 2 should have arisen), and so on -- a frame shift.

"The great thing about the frame shift theory is it makes both things correct," said Ann Burke, an evolutionary morphologist at Wesleyan University in Connecticut, who was not involved in the current study. "Birds are dinosaurs, but developmentally the digits are 2, 3 and 4."

In the new study, Japanese researchers led by Koji Tamura of Tohoku University transplanted certain cells from the feet to the wings and vice versa of developing chicks. These cells are implicated in the growth of digit 4. The researchers found evidence that the last digit of the wing does not correspond to the last digit of the foot. This supports the theory that the wing, unlike the foot, does not have a digit 4, they said.Then the team mapped out digit development using cell-labeling techniques (enabling them to know where a certain cell ended up once it matured). They found that by 3.5 days of embryonic development, a shift occurs, causing cells in the progenitor region for digit 4 to move forward and grow into digit 3. The same shift occurs for the digits that become 1 and 2.

The findings accomplish two things, according to Tim Rowe, a professor of paleontology at the University of Texas at Austin who was not involved in the study.

First, "it pertains directly to this seeming conflict between paleontological records and developmental records. It shows in fact there is no inconsistency," said Rowe.

And second, it provides an excellent example of a shift in which one body part is transformed into another during embryonic development, he said.

"We are discovering part of the Holy Grail, which is the evolution of development, how the development of the limb changed during evolution of birds from their theropod ancestor," Rowe said.

This is not the first research to support the frame shift hypothesis, according to Wagner . "I think there is now enough data that shows that the frame shift actually happened," Wagner told LiveScience. "This is going a step further; it shows us the developmental mechanism."

To determine the identity of the last digit in the chicks' "hands," the study used the development of the last digits in a five-digit mouse limb as a guiding model. This leaves Alan Feduccia, an evolutionary biologist at the University of North Carolina at Chapel Hill, skeptical of the results.

Feduccia, who wasn't involved in the study, is an opponent of the predominant scientific view that birds are descended from theropod dinosaurs (which include maniraptors). Rather, he believes birds and theropod dinosaurs share a common, earlier ancestor. This new study gives him no reason to change his mind.

"The experimental results seem to be very equivocal," Feduccia said, "because the bird hand is so highly modified that we don't know that same genetic mechanisms apply to digit identity."

The shift in digits just doesn't make sense, he said. "There is no imaginable selective advantage for such a shift -- in other words, why would it occur?"

But he is in the minority.

Wesleyan’s Burke has another issue with the frame shift theory; she believes renumbering the digits of the growing chicks is potentially misleading.

"The dinosaur ancestry of birds is absolutely sound and so well-supported that nobody disagrees with that, so just trying to change the digit numbers in living birds to conform to fossilized ancestry is unnecessary and eclipses important evolutionary change," she said.

Man-Sized Dinosaur Was a Tiny T-Rex