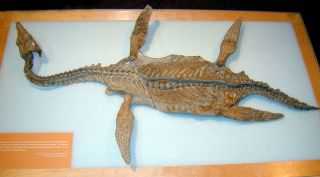 With the 200th anniversary of the birth of Charles Darwin this week, people around the world are celebrating his role as the father of evolutionary theory. Events and press releases are geared, in part, to combat false claims made by some who would discredit the theory.

One frequently cited "hole" in the theory: Creationists claim there are no transitional fossils, aka missing links. Biologists and paleontologists, among others, know this claim is false.

As key evidence for evolution and species' gradual change over time, transitional creatures should resemble intermediate species, having skeletal and other body features in common with two distinct groups of animals, such as reptiles and mammals, or fish and amphibians.

These animals sound wild, but the fossil record — which is far from complete — is full of them nonetheless, as documented by Occidental College geologist Donald Prothero in his book "Evolution: What the Fossils Say and Why It Matters" (Columbia University Press, 2007). Prothero discussed those fossils last month at the American Museum of Natural History in New York, along with transitional fossils that were announced since the book was published, including the "fishibian" and the "frogamander."

At least hundreds, possibly thousands, of transitional fossils have been found so far by researchers. The exact count is unclear because some lineages of organisms are continuously evolving.

Here is a short list of transitional fossils documented by Prothero and that add to the mountain of evidence for Charles Darwin's theory. A lot of us relate most to fossils of life closely related to humans, so the list focuses on mammals and other vertebrates, including dinosaurs.