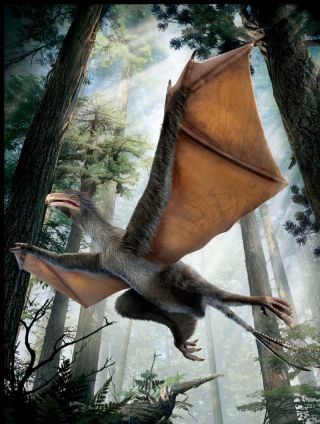 Move over, Batman — there's a new Dark Knight in town. A tiny dinosaur with batlike wings may have glided through the Jurassic forests of what is now northeastern China, say paleontologists who analyzed the animal's bones.

Unlike any dinosaur ever found, the feathered pipsqueak may have been a failed experiment in early bird flight, the researchers say.

Unlike its close relatives — birds and birdlike dinosaurs — the new specimen had long, rodlike bones on its wrists connected by soft, fleshy tissue.

The creature is the first known dinosaur with membranous wings, said Xing Xu, a paleontologist at Linyi University in China, and co-author of the study published today (April 29) in the journal Nature. [See Images of the Bat-Dinosaur from China]

"This is the most unexpected discovery I have ever made, even though I have found a few really bizarre dinosaurs in my career," Xu told Live Science in an email.

However, due to the dinosaur's strange body plan, the findings are likely to be controversial, some scientists say.

The fossil comes from the Middle-Upper Jurassic period (about 160 million years ago), and was found by a farmer, in the Tiaojishan Formation of Hebei Province, China. The specimen's authenticity was confirmed by multiple lines of evidence, the researchers wrote.

Xu and his colleagues named the new species Yi qi (pronounced ee chee), which means "strange wing" in Chinese. Yi qi belongs to a group of dinosaurs called theropods that were mostly carnivorous, and fits into subgroup of tiny, feathered dinosaurs called scansoriopterygids.The researchers estimate the creature weighed less than a pound (380 grams).

Xu's team noticed unusually long, rodlike bones extending from each of the creature's wrists connected by patches of soft, membranous tissue, neither of which have been seen in any other dinosaur. In fact, these bones have been found only in flying or gliding four-legged creatures, such as flying squirrels and bats. The specimen also had feathers, but not the kind used for flight, the researchers said.

Yi qi probably wasn't a great flyer, and most likely moved through the air by a combination of flapping and gliding, Xu said. This was "a failed experiment in flight along the line to birds," Xu said, "but we don't know why [it failed]." During the early evolution of birdlike dinosaurs, many different body plans arose, but only feathered wings went on to give rise to modern birds, possibly because they were more efficient than the batlike wings, Xu said.

Some scientists praised the finding, while others were more skeptical.

"This is an astounding discovery, and I think it's one of the most unexpected and downright bizarre dinosaurs that has been found over the past few years," Stephen Brusatte, a paleontologist at the University of Edinburgh in Scotland, who was not involved in the study, told Live Science.The findings suggest flight probably evolved many times among dinosaurs, but only one group — birds — were able to endure, he said.

However, the study will likely stir debate in the scientific community, said Luis Chiappe, a paleontologist and director of the Dinosaur Institute at the Natural History Museum of Los Angeles County, who had no part in the study but was a former advisor to one of the authors.

Many fossils from sites in China have been tinkered with or enhanced, Chiappe told Live Science. "I'm not saying this fossil has been tampered [with]," he said, but "because of this being a very odd body plan, it's going to be quite controversial and hard to swallow."

Chiappe also pointed out that the researchers' placement of the specimen in the theropod family tree might be too narrow. A "more holistic approach" might reveal that the animal was a different kind of dinosaur, or perhaps not a dinosaur at all, he said.