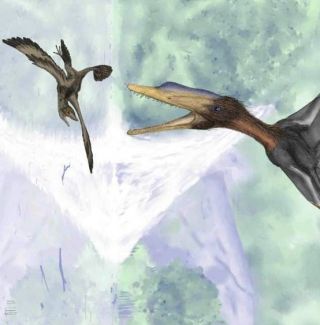 A newly-discovered maniraptoran dinosaur may have looked like the feathered dinosaur seen here, about to become a snack for the larger Darwinopterus modularis.
(Image: © Mark Witton/University of Portsmouth)

A new fossil discovery could be the world's smallest known dinosaur — a feathered, birdlike creature that lived more than 100 million years ago and grew no more than 15.7 inches (40 centimeters) long.

The fossil, a tiny neck bone found in the southern U.K., is a mere quarter-inch (7.1 millimeters) in length. It belongs to an adult dinosaur that lived in the Cretaceous period 145 million to 100 million years ago, reported University of Portsmouth paleozoologist Darren Naish in the August issue of the journal Cretaceous Research.

That would put the animal in the running for world's tiniest dino, a title currently held by Anchiornis, another birdlike dinosaur that lived in what is now China 160 million to 155 million years ago.

The new bone belongs to a maniraptoran, a group of theropod dinosaurs believed to be the line that eventually led to modern-day birds. With only one vertebra to go on, it's difficult to say what the tiny dino ate, or even how long it really was.

The vertebra lacks a neurocentral suture, a rough, open line of bone that doesn't close until a dinosaur is an adult, Naish and his University of Portsmouth colleague Steven Sweetmen reported. That means the dinosaur was grown when it died.

But figuring out the length of the dinosaur from one bone was trickier. The researchers used two techniques to estimate how big the maniraptoran might have been. The first method involved building a digital model of the dinosaur's neck and then fitting that neck into a silhouette of a generic maniraptoran. That technique is more art than science, Naish wrote on his blog, Tetrapod Zoology, predicting it would make some dinosaur researchers "vomit with rage." A slightly more mathematical approach used neck-to-body ratios of other related dinosaurs to calculate the new maniraptoran's length. Both methods led to a "ballpark" of about 13 to 15.7 inches (33 to 50 centimeters), Naish wrote.

The new dinosaur does not have an official name, and is going by the moniker of the Ashdown maniraptorian after the spot where it was found. If the Ashdown dino is found to be the smallest on record, it will beat out North America's smallest known dinosaur by about 6 inches (15 cm). That dinosaur, Hesperonychus elizabethae, was a velociraptor-like predator with a nasty curved claw on its toe. It stood about a foot and a half (50 cm) tall and weighed 4 pounds (2 kilograms).