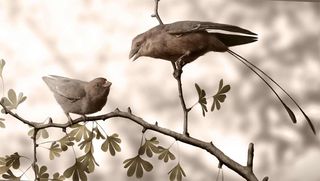 Researchers have determined the gender of a specimen of an ancient beaked bird Confuciusornis sanctus (reconstruction shown here) to be female, finding this species has drab females and flashy males like today's birds.
(Image: © Stephanie Abramowicz, NHM Dinosaur Institute.)

An ancient, beaked bird that lived in what is today northeastern China was ovulating when she, yes "she," perished some 125 million years ago, suggests new research that can reveal the gender of bird fossils.

Scientists investigated the ancient, beaked bird Confuciusornis sanctus. Hundreds of fossils of the extinct, crow-sized species are found in lake deposits in northeastern China. The area back then was "a seasonal forest that surrounded small lakes, a very rich ecosystem with a great variety of animals and plants," said researcher Luis Chiappe, paleontologist and director of the Natural History Museum of Los Angeles County's Dinosaur Institute.

Some fossils of this ancient bird were discovered with pairs of long, almost body-length ornamental tail feathers, while others were not. Scientists had suggested these differences were sexual in nature; in modern birds, males, such as peacocks, are often flamboyantly showy to court the opposite sex, while females, such as peahens, are typically rather drab, presumably to avoid attracting the attention of predators to themselves or their young.

Scientists had little evidence to prove whether the more flashy Confuciusornis sanctus fossils were male or not, however. But now researchers have found details in these skeletons that apparently enable clear gender identification, suggesting the showier fossils were indeed male. [Avian Ancestors: Dinosaurs That Learned to Fly]

"I think that it is so exciting to be able to say with certainty that this 125-million-year-old fossil bird was a reproductively active female," researcher Anusuya Chinsamy-Turan, a paleobiologist at the University of Cape Town in South Africa, told LiveScience.

"People might wonder why this has never been found before," Chinsamy-Turan added. "The reason is that for medullary bone to be observed, the female bird has to be in a particular physiological state — that is, ovulating, or just having laid eggs."

This female fossil did not possess ornamental feathers, which supports the idea that ancient female birds were as drab as their modern counterparts.

Intriguingly, researchers found medullary bone in some fossils even before the skeletons of those birds were full-grown. This suggests that this and other early birds matured sexually well before their skeletons matured.

"The most important conclusion is that early birds had reproductive patterns very different from their living counterparts and more akin to large dinosaurs," Chiappe told LiveScience.

The research could help scientists determine the sex of birds that lived millions of years ago, as well as shed light on ancient sexual maturity patterns. Future research should analyze otherearly bird species, Chiappe said.

The scientists detailed their findings online Jan. 22 in the journal Nature Communications.