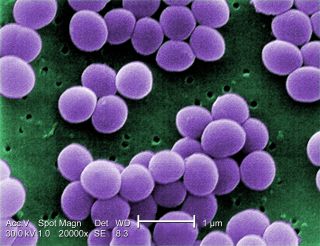 Bacteria are microscopic, single-celled organisms that thrive in diverse environments. These organisms can live in soil, the ocean and inside the human gut.

Humans' relationship with bacteria is complex. Sometimes bacteria lend us a helping hand, such as by curdling milk into yogurt or helping with our digestion. In other cases, bacteria are destructive, causing diseases like pneumonia and methicillin-resistant Staphylococcus aureus (MRSA).

Bacteria (singular: bacterium) are classified as prokaryotes, which are single-celled organisms with a simple internal structure that lacks a nucleus, and contains DNA that either floats freely in a twisted, thread-like mass called the nucleoid, or in separate, circular pieces called plasmids. Ribosomes are the spherical units in the bacterial cell where proteins are assembled from individual amino acids using the information encoded in ribosomal RNA.

Bacterial cells are generally surrounded by two protective coverings: an outer cell wall and an inner cell membrane. Certain bacteria, like the mycoplasmas, do not have a cell wall at all. Some bacteria may even have a third, outermost protective layer called the capsule. Whip-like extensions often cover the surfaces of bacteria — long ones called flagella or short ones called pili — that help bacteria to move around and attach to a host.

A few different criteria are used to classify bacteria. The organisms can be distinguished by the nature of their cell walls, by their shape, or by differences in their genetic makeup.

There are three basic bacterial shapes: Round bacteria called cocci (singular: coccus), cylindrical, capsule-shaped ones known as bacilli (singular: bacillus); and spiral bacteria, aptly called spirilla (singular: spirillum). The shapes and configurations of bacteria are often reflected in their names. For example, the milk-curdling Lactobacillus acidophilus are bacilli, and pneumonia-causing S. pneumoniae are a chain of cocci. Some bacteria take other shapes, such as stalked, square or star.

Most bacteria multiply by a process called binary fission, according to the Cornell University College of Agriculture and Life Sciences. In this process, a single bacterial cell, called the "parent," makes a copy of its DNA and grows larger by doubling its cellular content. The cell then splits apart, pushing the duplicated material out and creating two identical "daughter" cells.

Some bacterial species, such as cyanobacteria and firmicutes, reproduce via budding. In this case, the daughter cell grows as an offshoot of the parent. It starts off as a small nub, grows until it is the same size as its parent, and splits off.

The DNA found in parents and offspring after binary fission or budding is exactly the same. Therefore, bacterial cells introduce variation into their genetic material by integrating additional DNA, often from their surroundings, into their genome. This is known as horizontal gene transfer; the resulting genetic variation ensures that bacteria can adapt and survive as their environment changes. [Watch Strange, Glowing Bacteria Harpoon and Swallow DNA to Evolve]

Transformation is the most common process of horizontal gene transfer and occurs when short DNA fragments are exchanged between donors and recipients. Transduction, which typically only occurs between closely related bacteria, requires the donor and recipient to transfer DNA by sharing cell surface receptors. Conjugation requires physical contact between the cell walls of bacteria; the DNA transfers from the donor cell to the recipient. Through conjugation, a bacterial cell can transfer DNA to eukaryotic cells (multi-celled organisms). Conjugation aids in the spread of antibiotic-resistance genes.

Bacteria in human health and disease

Bacteria can be beneficial as well as detrimental to human health. Commensal, or "friendly" bacteria, share space and resources within our bodies and tend to be helpful. There are about 10 times more microbial cells than human cells in our bodies; the highest numbers of microbial species are found in the gut, according to microbiologist David A. Relman's 2012 article in Nature.

The human gut is a comfortable setting for bacteria, with plenty of nutrients available for their sustenance. In a 2014 review article published in the American Journal of Gastroenterology, the authors mention that gut bacteria and other microorganisms, such as helpful strains of E.coli and Streptococcus, aid in digestion, stave off colonization by harmful pathogens, and help to develop the immune system. Moreover, the disruption of gut bacteria has been linked to certain disease conditions. For instance, patients with Crohn's disease have an increased immune response against gut bacteria, according to a 2003 review published in the journal The Lancet.

Other bacteria can cause infections. Several bacteria — ranging from so-called group A Streptococcus, Clostridium perfringens (C. perfringens), E. coli and S. aureus can cause a rare but severe soft tissue infection called necrotizing fasciitis (sometimes called flesh-eating bacteria). According to the Centers for Disease Control and Prevention (CDC), this infection affects the tissues surrounding muscles, nerves, fat and blood vessels; it can be treated, especially when caught early.

Antibiotics are typically used to treat bacterial infections. However, in recent years, improper and unnecessary use of antibiotics has promoted the spread of several strains of antibiotic-resistant bacteria.

In cases of antibiotic resistance, the infectious bacteria are no longer susceptible to previously effective antibiotics. According to the CDC, at least 2 million people in the U.S. are infected with antibiotic-resistant bacteria every year, leading to the death of at least 23,000 people.

"Pretty much any infection you can think of now has been identified as being associated with some level of resistance," said Dr. Christopher Crnich, an infectious disease physician and hospital epidemiologist at the University of Wisconsin Hospitals and Madison Veterans Affairs Hospital. "There's very few infections that we now treat where infections caused by resistant bacteria is not a clinical concern."

MRSA, for example, is one of the more notorious antibiotic-resistant bacterial strains; it resists methicillin and other antibiotics used to treat Staphylococcus infections, which are acquired primarily through skin contact. MRSA infections occur in health-care settings such as hospitals and nursing homes, where it can lead to pneumonia or bloodstream infections. MRSA also spreads in the community, especially in situations where there is a lot of exposed skin, other physical contact, and the use of shared equipment — for example, among athletes, in tattoo parlors, and in day care facilities and schools. Community-acquired MRSA most often causes serious skin infections.

An important facet of combating antibiotic resistance is to be careful about their use. "It's so important for us to use antibiotics intelligently," Crnich told LiveScience. "You only want to use an antibiotic when you have a clear-cut bacterial infection."

This article was updated on Apr. 25, 2019, by Live Science Contributor Rachel Ross.