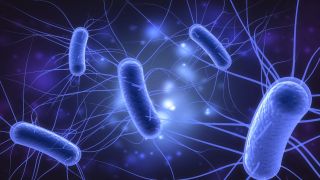 Some types of E. coli bacteria keep the intestinal tract healthy, while others cause infection.
(Image: © Shutterstock)

Escherichia coli (known as E. coli) is a group of bacteria that typically lives in the intestines of humans and animals and helps keep our guts healthy. Certain types of the bacteria, however, can occasionally cause severe illness, according to the Centers for Disease Control and Prevention (CDC).

The types of E. coli that cause the majority of harmful infections in the U.S. produce a toxin called Shiga, and are appropriately called Shiga-toxin-producing E. coli (STEC). In North America, the most common strain of STEC is E. coli O157:H7 (often shortened to E. coli O145, or simply O145). The CDC estimates that 265,000 Americans are infected with STEC per year, resulting in about 3,600 hospitalizations and 30 deaths.

Enterotoxigenic E. coli (ETEC) is one of the leading causes of "traveler's diarrhea," which is often contracted when travelers from developed regions visit less-developed regions, according to Emory University. The CDC estimates that anywhere from 30 to 70 percent of travelers may be affected depending on the time of year and destination, with areas such as Latin America, Africa and Asia having the highest risk of travelers developing ETEC.

While E. coli can spread and enter the body in a variety of ways, about 85 percent of infections are from food, according to the University of California San Francisco. Meat becomes contaminated when the bacteria is spread from the intestinal tract of the animal during butchering or processing. Fresh produce may also be contaminated with the bacteria if it enters the water source, such as with the 2018 outbreak of E. coli on romaine lettuce.

Pathogenic strains of E. coli can be ingested with contaminated food, such as undercooked ground beef, soft cheeses made from raw milk, fresh produce, grains or even contaminated beverages, including water, unpasteurized milk and fruit juices, according to the U.S. Department of Health and Human Services.

Infection can also occur after not carefully washing hands that have come in contact with animals (especially livestock), or people or surfaces that have been exposed to the harmful bacteria. Swimming in contaminated water may also lead to an E. coli infection, especially if any water was swallowed.

Although E. coli can infect anyone, certain groups of people are more at risk for developing symptoms than others, including young children and older adults, and those with weakened immune systems or decreased stomach acid levels, according to the Mayo Clinic.

E.coli symptoms typically appear about one to eight days after consuming contaminated food or beverages, according to UCSF. Most infected people will experience diarrhea and stomach cramps, with some experiencing nausea, vomiting and fever.

Some infections can lead to hemolytic uremic syndrome (HUS), a potentially life-threatening disease. HUS causes red blood cells to be destroyed and leads to kidney failure. An estimated 5 to 10 percent of people with STEC infection may develop HUS, according to the CDC. Symptoms include decreased frequency of urination, lethargy and losing pink color in cheeks and inside eyelids. Experts strongly advise seeking immediate medical treatment if any of those symptoms appear.

E. coli is also responsible for about 90 percent of urinary tract infections (UTI), according to UCSF. Symptoms of a UTI include a strong urge to urinate, a burning sensation when urinating and cloudy or strong-smelling urine, according to the Mayo Clinic. Women, especially those who are sexually active, are at a higher risk of developing a UTI because of the shorter length of the urethra and the close proximity of the urethra to the anus.

Doctors diagnose E. coli infections by testing stool samples for the bacteria and specific toxins, according to the Mayo Clinic.

E. coli infections aren't typically treated with antibiotics unless the infection is outside the intestinal tract, such as with a UTI. Within the intestinal tract, though, "antibiotics may kill other beneficial bacteria in the gut, allowing more space and nutrients for the E. coli to grow," said Sarah Fankhauser, a microbiologist at Oxford College of Emory University in Georgia.

Doctors also recommended against taking anti-diarrheal medication to treat the symptoms of the infection, as the medication can slow down the digestive system and prevent the body from removing the toxins produced by the E. coli. Instead, most adults who are otherwise healthy typically recover from the infection in about a week with rest and proper hydration.

There are several ways that harmful E. coli infections can be prevented, according to UCSF:

Diarrheal diseases, including those caused by E. coli, are a major health issue around the world. The development of vaccines aims to reduce the number of infections, and, ultimately, the number of deaths, especially among young children, caused by complications associated with the diseases.

A 2018 review published in the journal Frontiers in Microbiology summarized how, over the past several decades, researchers have tried a variety of approaches to develop effective vaccines for E. coli. So far, scientists have developed rudimentary vaccines for traveler’s diarrhea but they aren't very effective and work against only a few specific strains, Fankhauser said.

A new and potentially promising area of vaccine research is the development of personalized E. coli vaccines based on an individual's blood type. A 2018 study published in The Journal of Clinical Investigation found that the severity of symptoms caused by an E. coli infection is related to a person's blood type.

Another team of researchers in the U.S. and Europe has made progress in developing a vaccine for preventing UTIs caused by E. coli. The group's preliminary 2017 study, published in the journal The Lancet Infectious Diseases, demonstrated that their vaccine was safe and effectively reduced the number of UTIs in more than 30 female patients.