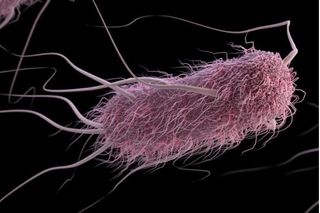 Sometimes, scientists conduct experiments in lab dishes. Other times, they observe people who are already sick. And then there are times when they ask people to drink E. coli-laced water to give them traveler's diarrhea.

In a new study, that was the stomach-churning task given to volunteers, who bravely downed a cup of E. coli, for science.

Their fortitude paid off. Scientists were able to study an important question: whether a person's blood type affects the severity of an "Enterotoxigenic E. coli" infection, the leading cause of traveler's diarrhea.

What's more, the study uncovered an explanation for these findings: It appears that the bacteria release a protein that attaches to intestinal cells in people with blood type A, but not in people with other blood types.

The new finding might one day lead to the development of a vaccine that could reduce disease severity in people with type A blood. "A vaccine targeting this protein would potentially protect the individuals at highest risk for severe disease," study senior author Dr. James Fleckenstein, an associate professor of medicine and molecular microbiology at Washington University School of Medicine in St. Louis, said in a statement.

Most types of E. coli are harmless, but some types, including Enterotoxigenic E. coli (ETEC), can cause severe disease, according to the Centers for Disease Control and Prevention. ETEC produces a special toxin that causes the intestines to secrete excessive fluid, resulting in diarrhea, the CDC said. (Another type of E. coli that causes symptoms, called Shiga toxin-producing E. coli, was implicated in the recent romaine lettuce outbreak.)

These bacteria cause millions of cases of diarrhea worldwide each year, mainly in developing countries. It's also the most common cause of traveler's diarrhea, or diarrheal illness in people traveling to developing countries. The bacteria can cause severe, watery diarrhea, and the illness can be particularly serious for children; it's estimated that up to 500,000 children under age 5 die from ETEC infection each year, according to Emory University.

Previously, researchers found that children in Bangladesh who contracted ETEC seemed to have more severe symptoms if they had blood type A, but the reason for this was unclear.

So, in the new study, the researchers analyzed data from earlier trials in which 106 healthy people were given a drink containing ETEC bacteria, in what's known as an ETEC "challenge" study.

After the participants drank the E. coli water, they stayed at the center for five days under observation. Those who developed moderate to severe diarrhea were treated with antibiotics. And at the end of the study, those who didn't get sick were still given antibiotics to clear the bacteria from their systems before they went home.

The study also found that ETEC bacteria produce a protein called EtpA that specifically latches onto another protein on the intestinal cells in people with blood type A. This means that the E. coli bacteria can fasten to the intestinal wall, which makes it easier for them to deliver their toxin to intestinal cells, the researchers said.

The researchers noted that their findings don't mean that people with blood type A should steer clear of travel to developing countries, or that people with type B or O blood can be less cautious while traveling.

This is because "there are a lot of different species of bacteria and viruses that can cause diarrhea, so even though this blood-group association is strong [for these particular bacteria], it doesn't change your overall risk," Kuhlmann said. "You should continue taking the same precautions whatever your blood type."

The study was published online today (May 17) in The Journal of Clinical Investigation.