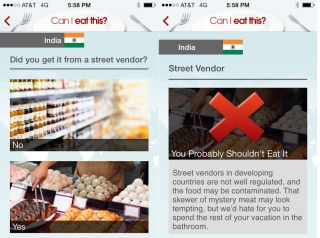 The Centers for Disease Control and Prevention has created an app to help people avoid what's commonly known as traveler's diarrhea. Above, two screen shots from the app, called "Can I Eat This?"
(Image: © CDC)

Having an adventurous appetite while traveling can sometimes make you sick if you consume food or water that's been contaminated with harmful microorganisms.

But now the Centers for Disease Control and Prevention has created an app to help people avoid what's commonly known as traveler's diarrhea, a condition that affects an estimated 10 million travelers each year.

The app, called Can I Eat This?, asks users to select the country they're visiting and answer a few simple questions about the item they are thinking of consuming, such as whether it is a food or beverage, whether it was bought from a street vendor and whether it's cooked. [Top 7 Germs in Food that Make You Sick]

For example, if you say you are visiting India, and want to know if something is safe to drink, the app asks "Is there ice in it?" If you say yes, the app responds that "You probably shouldn't drink it." (The app explains that ice is usually made with tap water, which can be unsafe in some countries, including India.)

But if you say you are drinking fruit juice that came in a sealed container that you opened yourself, the app responds, "It's probably OK to drink."

"With Can I Eat This?, you can be more confident that your food and drink choices won't make you spend your international trip in the bathroom," the CDC said.

The app is available for download on Andriod or iPhones, and was first released in April this year.