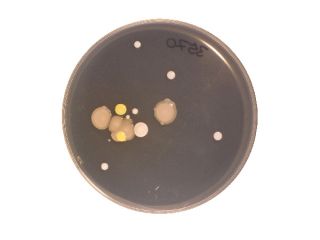 Unknown and mysterious species of microbe lurk in our belly buttons, the Bellybutton Biodiversity project is finding. Preliminary results from the project, based at North Carolina State University, show hundreds of new or little-known types of bacteria living in navels. Some of these miniscule creatures can grow into fuzzy colonies on petri dishes.

Bacteria grown from a sample collected from anonymous donor no. 952's belly button.

After the belly button bacteria are collected on a Q-tip. Researchers analyze their DNA to determine what species are present. They also grow those microbes that will cooperate in dishes like this one.

No one knows what many of the bacteria found in bellybuttons eat and many species cannot be cultured in a laboratory. As a result, the microbes grown in dishes like this one do not represent all of a belly button's inhabitants

From the first 92 samples, researches counted 1,400 species, but the actual count is probably much higher, they say.

Of the 1,400 species, about 600 or so don't match up in obvious ways to known species, meaning they are either new to science or not well known, according to Rob Dunn, an associate professor in the North Carolina State University biology department, and the belly button principal investigator.

So far, belly button investigators have found many, many species, but a substantial number of these are very common among the people who submit samples.

The microbes living in our belly buttons and elsewhere on our skin play an important role in keeping us healthy, scientists are finding.

The project has received more than 400 samples so far, and has been overwhelmed by potential microbe donors

As the project continues, researchers believe they could find thousands of additional species inhabiting belly buttons.