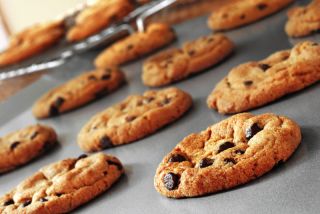 General Mills is recalling 10 million pounds of flour that may be linked with an outbreak of E. coli. And even though baking would kill the E. coli pathogen, experts say it's still wise to throw out the recalled flour if you have it in your kitchen.

"I wouldn't want to have it in my home," said Benjamin Chapman, an associate professor and food safety specialist at North Carolina State University. "It's not uncommon to get flour dust throughout your kitchen, and if there's a pathogen in that flour dust, I wouldn't want to spread that around."

General Mills announced on Tuesday (May 31) that the company is working with health officials to investigate the cause of a new E. coli outbreak that has sickened 38 people in 20 states, including 10 people who had to be hospitalized. It's unclear what food might be causing the outbreak, and General Mills hasn't found E. coli contamination in its products or in its manufacturing facilities.

However, about half of the people who got sick said they made something with flour at home before they got sick, and some of the ill people said they consumed raw dough or batter, the company said in a statement. The company has issued a voluntary recall that includes products bearing any of the nine UPC codes that it lists on its website.

Flour is made from wheat that's grown outdoors, and so flour can contain bacteria, which are killed when you bake, fry or boil the flour, the company said. [Top 7 Germs in Food That Make You Sick]

Although it might be tempting to keep the recalled flour, and just be careful to bake it thoroughly, Chapman said that this would be risky. Flour is used for more than just baking — for example, you can use it to thicken sauces, he said. And if you don't heat it enough, you might not kill a pathogen, Chapman said.

The new outbreak involves a bacterial strain called E. coli O121, which can cause stomach cramps, bloody diarrhea and dehydration. It belongs to a group of E. coli bacteria known as shiga toxin-producing E. coli, or STEC. The most common STEC are E. coli O157:H7, but in recent years, food safety authorities have increasingly been on the lookout for other kinds of STEC, including E. coli O121, Chapman said.

This isn't the first time that a flour or dough product has been recalled. In 2009, Nestlé Toll House recalled batches of refrigerated cookie dough because the product was linked with an outbreak of E. coli O157:H7. And earlier this year, dough from the restaurant chain Pizza Ranch was linked with 13 cases of E. Coli O157:H7 in nine states.

We may start to see more outbreaks tied to products like flour as health officials get better at finding the sources of foodborne illness outbreaks through genome sequencing of pathogens, Chapman said.

The new outbreak also serves as a reminder not to eat raw dough, according to General Mills. "Consumers are reminded to wash their hands, work surfaces, and utensils thoroughly after contact with raw dough products or flour, and to never eat raw dough or batter," the statement said.