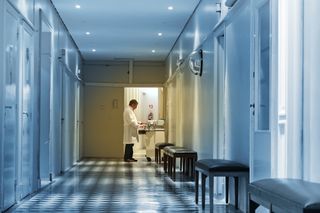 The rate of MRSA infections in hospital patients has increased in recent years, according to a new study.

Results show that in 2003, an average of 21 out of every 1,000 hospital patients developed an infection with the bacteria commonly called MRSA, or methicillin-resistant Staphylococcus aureus. In 2008, that number was 42 out of 1,000 patients. The study involved patients at nonprofit academic medical centers in the United States.

MRSA is a strain of bacteria that's resistant to the antibiotics used to treat staph infections.

"This means that MRSA infections are very common, and that many of them — and an increasing number in 2003 to 2008 — were serious enough to require hospitalization," said study researcher Dr. Michael David, an assistant professor at the University of Chicago.

The study was based on data gathered from 160 academic medical centers, along with 260 of their affiliated hospitals. Researchers examined patients' billing records and medical charts. There were between 2.7 million and 3.7 million hospital discharge records during each year of the study.

People who must be hospitalized can take some steps to lower their risk of infection, David said. "Patients in hospitals can themselves wash their hands and remind visitors and health care workers to wash their hands, as well, upon entering their room," he said.

"It is believed that most MRSA transmission in hospitals occurs on the hands of health care workers," he said. "The most important intervention may be hand washing."

The findings seem to counter the results of a study published in July in the Journal of the American Medical Association, which reported a decrease in MRSA infections between 2005 and 2010 in both hospitalized patients and people who contracted the bacterial infection elsewhere in their communities. However, that study was based on data collected by the Department of Defense on more than 9 million military personnel, whereas the new study was based on general population patients treated at academic medical centers.

A 2010 study from researchers at the Centers for Disease Control and Prevention also suggested a decline in MRSA infections. But the CDC study included only invasive cases of MRSA, in which the infection has spread to the blood. The new study, in contrast, also included infections of the skin, which make up the majority of MRSA infections, David said.

It is not known whether the new study's findings are representative of MRSA infection rates at all U.S. hospitals, David noted. Additionally, it's not known what has happened to the infection rate since 2008, he said. There are no data available on hospitalized patients in the general population since that time.

More research is needed to figure out how to stop the spread of MRSA outside the health care setting, and how to prevent infections in people who are carrying the bacteria, but don’t have any symptoms of infection, he said.

The new study is published in the August issue of the journal Infection Control and Hospital Epidemiology.

Pass it on: MRSA infections may be on the rise.