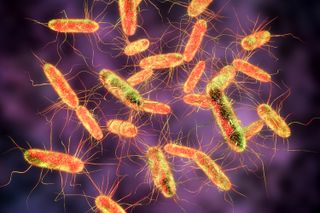 Salmonella is a rod-shaped bacterium that can cause an infection in the intestinal tract.
(Image: © Shutterstock)

Salmonella is a group of bacteria that commonly cause a foodborne illness called salmonellosis. Every year, about 1.2 million people are infected with Salmonella, with 23,000 individuals hospitalized due to the infection and 450 dying from it, according to the U.S. Centers for Disease Control and Prevention (CDC). Most people who get infected with Salmonella get the bacteria from contaminated food or water.

There are more than 2,300 types of bacteria in the Salmonella genus, according to the U.S. Department of Agriculture (USDA). Salmonella Enteritidis and Salmonella Typhimurium are the most common strains of Salmonella in the U.S. and are responsible for at least half of all infections.

Contamination typically happens after infected feces comes into contact with animals, crops or water and people then consume or touch those items and don't wash their hands.

Humans and animals typically have some Salmonella bacteria in their stomach and intestines, but stomach acid and intestinal bacteria generally kill the Salmonella before it has the opportunity to invade cells and replicate. Or, the Salmonella simply exit the digestive tract before it causes problems, according to Medical Microbiology (4th Ed., University of Texas Medical Branch at Galveston, 1996).

Salmonella can be found in many food sources, including raw meat, undercooked or improperly stored poultry and seafood, raw eggs, fresh produce, and even spices, nuts and supplements, according to the Mayo Clinic.

"We should thoroughly wash fruits and vegetables to remove any contaminating microorganisms," said Sarah Fankhauser, an assistant professor of biology at Oxford College of Emory University in Georgia. "However, washing will never get rid of 100 percent of bacteria on a fruit or vegetable, and this is problematic if the fruit/vegetable has been contaminated by particularly dangerous bacteria, such as Salmonella."

A cantaloupe, for example, has a rough and porous surface, which can make it difficult to wash all the bacteria away, Fankhauser told Live Science.

Contaminated ingredients can also find their way into baked goods, such as cereals and crackers.

Food can also become contaminated when people improperly handle it, by failing to thoroughly wash their hands after using the toilet, changing a diaper or touching a contaminated surface. Contamination can also happen if you prep produce on a surface where there was raw meat.

The temperature of the water you use when washing your hands can also make a difference. "Our bodies are 98 degrees F (37 degrees C), which is an optimal temperature for Salmonella, so 'warm' water will not kill Salmonella," Fankhauser said. For that reason, it's best to wash your hands with soap and the hottest water you can handle.

People at an increased risk of developing a Salmonella infection include young children, older adults, pregnant women, and people who have compromised immune systems or diseases of the intestinal tract, such as inflammatory bowel disease, according to the Mayo Clinic.

Healthy adults can also become more susceptible to a Salmonella infection by taking antacids, which lower the stomach's acidity, or antibiotics, which reduce the number of Salmonella-killing bacteria in the intestines.

Cases of Salmonella peak in mid-September, Fankhauser said, because warmer summer temperatures create ideal conditions for Salmonella, as well as many other bacteria.

Some people with a Salmonella infection have no symptoms, according to the Mayo Clinic. Others experience symptoms beginning within 8 to 72 hours after eating something that was contaminated.

Symptoms include diarrhea, nausea, vomiting, abdominal cramps, fever, chills, headache and blood in the stool. Some strains of Salmonella may result in typhoid fever, which is rare in the U.S. and primarily occurs in developing countries.

Most healthy people recover from their symptoms within two to seven days without receiving any specific treatment.

Salmonellosis can be diagnosed via a stool sample; however, for many people, the symptoms dissipate by the time the test results return from the lab. A blood sample may be taken to determine if the Salmonella infected the bloodstream, according to the Mayo Clinic.

The primary treatments for a salmonella infection include keeping hydrated, getting rest and replacing electrolytes (by drinking things like Gatorade or other sports drinks, Pedialyte or other electrolyte solution, or even coconut water). If diarrhea or vomiting make it difficult to stay hydrated, a hospital stay may be needed so that fluids can be administered intravenously.

If someone does come down with a Salmonella infection, it's important that all of the person's dirty clothes, bedding and towels get washed in a washing machine using the hottest water setting, Medical News Today reported. In addition, all surfaces that the infected person may have touched should be thoroughly disinfected; that includes handles on cabinets and doors.

If Salmonella gets into the bloodstream (typically through the immune cells that line the intestinal system, according to Fankhauser), additional complications can occur in tissue in and around the brain, spinal cord, heart and blood vessels. The bacteria can even work their way into bones and bone marrow. Reactive arthritis, another complication that can result from Salmonella entering the bloodstream, causes joint pain, eye irritation and painful urination.

Many precautions can help prevent salmonellosis, according to the U.S. government's Food Safety site:

It is also important to use proper cleaning materials when cleaning surfaces.

"A warm, soapy sponge could just spread the Salmonella and not kill it," Fankhauser pointed out. "I personally use a disinfectant on my counters after handling raw meat."

Be sure to use hot and soapy water — or, ideally, a dishwasher — for washing potentially contaminated dishes.