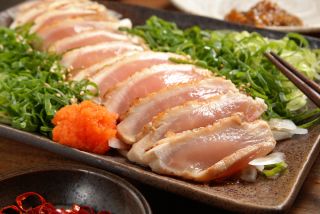 It's not uncommon to find raw foods on a restaurant menu — think sushi or steak tartare — but if you see uncooked poultry as an option the next time you're dining out, you may want to opt for something else.

Several restaurants in the United States are serving up a raw chicken dish that's referred to as either chicken sashimi or chicken tartare, according to Food & Wine Magazine. Though the "specialty" hasn't caught on much in the U.S., it's more widely available in Japan.

But if you're wondering whether raw chicken served in a restaurant has suddenly become safe to eat, the answer is still no. [Top 7 Germs in Your Food That Make You Sick]

Eating chicken sashimi puts a person at a "pretty high risk" of getting an infection caused by Campylobacter or Salmonella, two types of bacteria that cause food poisoning, said Ben Chapman, a food safety specialist and an associate professor at North Carolina State University.

"There's a pretty good chance that one or both of these pathogens are on/in the chicken meat itself," Chapman told Live Science in an email.

Campylobacter infections are one of the most common causes of diarrheal infections in the U.S., according to the Centers for Disease Control and Prevention (CDC). The bacteria cause gastrointestinal symptoms including diarrhea, cramping and abdominal pain, and in some cases can also cause nausea and vomiting, the CDC says. There are an estimated 1.3 million cases in the U.S. each year and fewer than 100 deaths, on average, each year from the infection.

Salmonella infections also cause symptoms such as diarrhea, fever and abdominal cramps, according to the CDC. About 1.2 million people contract Salmonella each year, and about 450 people die from the infection, the CDC says.

Chapman noted that eating raw chicken is different from eating raw fish, which can be found in sushi dishes. With raw fish, the germs that are most likely to make a person sick are parasites, and these parasites can be killed by freezing the fish, he said. Salmonella, on the other hand, "isn't going to be affected by freezing."

Chicken sashimi is sometimes prepared by boiling or searing the chicken for no more than 10 seconds, according to Food & Wine Magazine.

But these preparations probably only kill off the germs on the surface of the chicken, Chapman said. "But even that I'm not sure about," he added. In addition, when a chicken is deboned, other germs can get into the inside of the chicken, he said.

In Japan, where the dish is more popular, the Ministry of Health, Labour and Welfare advised restaurants in June 2016 to "re-evaluate raw and half-raw chicken menus," according to The Asahi Shimbun, a Japanese newspaper. The ministry urged restaurants to cook chicken to an internal temperature of 75 degrees Celsius (167 degrees Fahrenheit).

The recommendation from the ministry came after more than 800 people said they were sickened several months earlier after eating chicken sashimi and chicken "sushi" rolls, The Asahi Shimbun reported.